Davis Cup: New format is more than just a facelift; tournament has undergone a personality change

“Sad day for men’s tennis #ITF have voted for new format of #DavisCup (its no longer Davis Cup) Fooling themselves if they think top players will play a 18-team comp over 1 week at the end of the year????” read Pat Cash’s tweet in a sea of ‘RIP Davis Cup’ comments on the social media site. In 203 characters, the Australian, the 1987 Wimbledon champion and two-time Davis Cup champion, summed up the thoughts of many in the tennis world who were left shocked by the International Tennis Federation’s recent vote.

On Thursday morning in Orlando, Florida, delegates from 147 countries registered their vote for or against the ITF’s proposed revolutionary changes to a competition that has existed for 118 years. 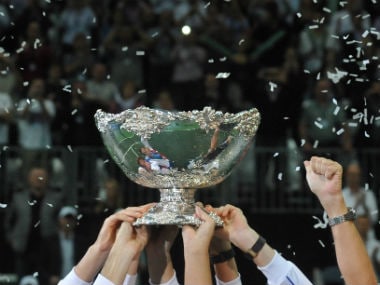 Till date, the Davis Cup was played on a home-away basis, with each tie consisting of four singles and a doubles rubber wedged in between. Held over four weekends in the year, the best of five set tournament (the only one apart from the four Grand Slams) tested both the mental and physical fortitude of athletes. Which is perhaps why the bigger names in tennis avoided it, save for the summit clashes. But it is worth noting that the Big 3 in men’s tennis, namely Roger Federer, Rafael Nadal and Novak Djokovic, all made the time to win at least one title each for their country.

The lack of star power, however, was cited as the main reason when the new proposal was floated by Kosmos investment Group, which is led by the Barcelona star Gerard Pique. In the end, though, the billions of dollars Pique and his company promised to pump into the sport won the game, set and match. The ITF committee voted 71.43 per cent in favour of the changes, thereby uprooting the legacy of the tournament. The Davis Cup didn’t just get a facelift; it has become a different being altogether.

The new format involves 18 teams – that includes two wild cards – shuffled into six groups of three, where the winner and top two runners-up would proceed to a knockout stage started from the quarterfinals. Each tie includes two singles and one doubles – all best of three sets.

All this, interestingly enough, is to take place within a week, at a predetermined venue, and the end of 11 gruelling months of tennis, when the players are eager to wind down.

The ITF’s main concern has been the scarce presence of the Big 4 – Federer, Nadal, Andy Murray and Djokovic – in Davis Cup ties. In the present date, all four are well above 30, and have recently returned from injury. As such, when the niggles of a long season start to take their toll towards the end of the year, will the Big 4 indeed compete in the new setting?

At the same time, the new format, and the many voices that backed it, ignore one element: matches will not take place for just one week of the year as purported. Qualification for the new world group will take place in February, fresh after the Australian Open, where 24 teams will compete in a one round knockout – home and away – to decide 12 direct entries. The four semifinalists from the previous edition are automatic entries, along with two wild cards.

The extra week of tennis in February though is a mild addition. Especially when there’s a bucket load of money in the offing.

Pique’s company Kosmos has promised to invest no less than USD 3 billion over 25 years, that will potentially increase the prize pool by USD 20 million. At the same time, the involvement of billionaire tycoon Larry Ellison, a patron of the Indian Wells Tennis Garden has invariably announced that the American venue will host the third edition of the revamped Davis Cup. The first two will be held in Europe, Madrid and Lille being considered as the opening host.

Pique’s involvement has been intriguing. At a time where sport all over the world has been governed by individuals who have nothing to do with it, a footballer has entered the world of tennis to decide what is right or wrong in a tournament that has been a mainstay in the tennis calendar for over a century. The Barcelona star was even given special permission by his club to travel to Florida to oversee the vote.

Todd Woodbridge, a 16-time men’s doubles champion, tweeted: “A footballer gets the stage at @ITF_Tennis AGM to tell us why @DavisCup needs to change but legends of the game of which there are many who disagree do not.”

The turn of events have left a particularly bitter taste for the Australians. From the 2020 season, Tennis Australia, in collaboration with the ATP had planned a World Team Cup (similar format as the new Davis Cup) to be held in Australia in the early half of the year. The prized Davis Cup has now become a direct rival to that.

What has been equally alarming though has been the push with which the ITF has tried to usher the new changes so urgently. Last year, the governing body proposed the trial of a new format, best of three set matches over two days, in the lower groups. That procedure took place this year, but the ITF seemingly ignored the feedback from those changes and gone ahead with a revamp that first surfaced in March.

There was never a consideration of easing in changes to the Davis Cup to allow players to adjust to it. Vijay Amritraj had once proposed to have the tournament organised once every two years. But the ITF had a different thinking. So much so that even the players weren’t consulted.

Another Australian, John Millman tweeted: “Hey @daviscup Quick question. Was wondering when the players vote is for the Davis Cup changed format is. Haven’t received the memo yet. Cheers.”

In the long run of this new format, it’s the lesser countries that will suffer the most. Davis Cups are their stage to take on a more decorated, higher-ranked rival on equal terms. And there have been plenty of instances, most notably Leander Paes’ defeat of Goran Ivanisevic in the Delhi heat in 1995, where home court advantage have helped on a miracle.

But that sort of romance doesn’t have a place in the balance sheet of the business of sport anymore. The ITF just ruled against it.