“Faster impossible, faster impossible!” Rafael Nadal yelled while gesticulating wildly in every direction. It was 2-2 in the second set tiebreaker of the Spain vs Britain semifinal doubles match; a serve down the T by Neal Skupski had just been netted by Nadal, and been immediately followed by a challenge. Except that the chair umpire refused to allow it, saying that Nadal had been too late in asking for the Hawkeye review.

Nadal obviously believed there was no way he could have challenged earlier than he did; that ‘faster’ was ‘impossible’. And the Madrid crowd, which had already been raising an almighty din at every good shot hit by the Spanish team, chose to act as Nadal’s vocal solicitors at that moment. They stomped their feet and let out a cacophony of catcalls, indignantly demanding the umpire change her decision.

It was as unusual a sight as any you’d ever find Nadal in. Supported by a posse of outraged teammates and surrounded by an army of loyal supporters, he looked more like a telenovela protagonist rather than the lone matador he usually is.

But the more significant (and perhaps less memorable) act by Nadal was what he did to defuse the situation. None of the Spaniards seemed okay with the umpire’s refusal to entertain their demands, and Nadal’s partner Feliciano Lopez even started advancing towards the chair, presumably in a bid to start another loud argument. But Nadal held Lopez back, and motioned for him to return to the service line.

He had accepted defeat in that small battle because he knew there was a bigger war to be won. He seemed to be telling Lopez to let it go, and to get back to business. And that’s exactly what the two of them did, before eventually winning the tiebreaker and sealing their progress to the final. 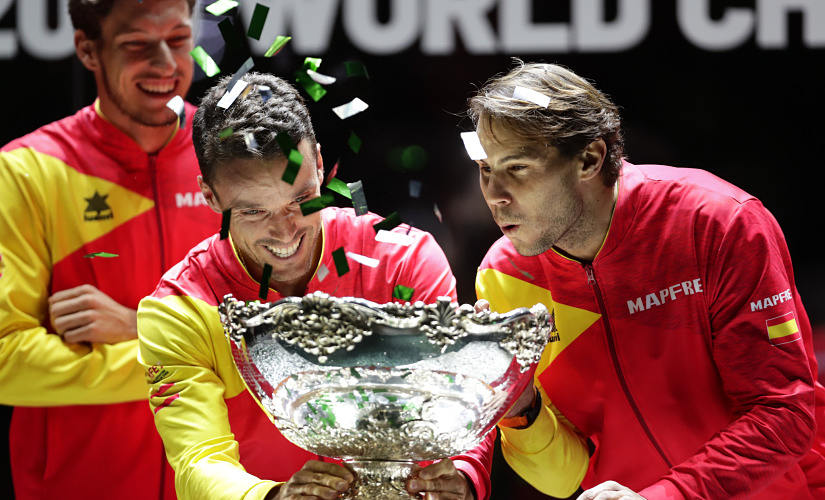 It was ‘back to business’ for Nadal and Spain in the larger scheme of things too. This was the first time they had reached the Davis Cup final in seven years, and the first time in what seemed like eternity that Nadal had turned out for his country with the unrivaled passion he has come to be known for. The format of the 2019 finals was startlingly new, but the intensity from Nadal and Spain was like the good old days.

The 33-year-old was absolutely on-point with his tennis too, from start to finish. Nadal won all the eight matches he played (five singles and three doubles), and didn’t lose his serve even once in singles. This was a quick indoor court, but Nadal bossed it like it was his beloved clay; he was too strong, too fast and too cussed for all of his opponents, and he single-handedly took Spain to the title.

When he clinched match point against Denis Shapovalov in the final, Nadal fell flat on his back and lay there for a good couple of minutes. And that was probably because the Atlas in him wanted some respite from the strain of not shrugging.

With the World No 1 taking the new Davis Cup so seriously, it was only natural for those below him to follow his lead. Literally every player who showed up in Madrid played like their life depended on it, and there were compelling stories to follow in every single tie.

Novak Djokovic went unbeaten in singles but looked like a deranged man when a couple of calls went against him in the doubles match against Russia. And when Serbia ended up exiting the tournament after squandering three match points in the quarterfinal, the retiring Janko Tipsarevic and his captain Ninad Zimonjic couldn’t hold back the emotions.

“It was very emotional because it’s Janko’s last….sorry,” said Zimonjic before breaking into tears.

“This emotion that you want to commit suicide after a day like this. You go towards and against the wind. These emotions are the things I can draw from these 20 years,” said Tipsarevic, looking just as distraught as his captain.

The team wanted to win for Tipsarevic, but it wasn’t to be. Not that they did anything wrong themselves; they were just up against an inspired Russian team, and in particular an inspired Andrey Rublev, who had seemingly forgotten how to lose.

Rublev was possibly the best player of the tournament after Nadal, winning all his singles matches and fighting till the very end even in doubles. His forehand was the talk of Madrid in the first half of the tournament, and it took a third set tiebreaker in the semifinal to finally end his challenge.

Rublev’s fellow NextGen members Alex de Minaur and Denis Shapovalov both gave an excellent account of themselves too. Shapovalov like Rublev did double duty, regularly backing up his spectacular singles performances with surprisingly potent doubles showings. Meanwhile De Minaur, with his passionate celebrations after every impossible chase, turned the Australian dugout into a vociferous cheerleading squad – a squad that included a scarily charged-up Nick Kyrgios.

Andy Murray was another notable cheerleader during the week, egging on his British teammates as they barreled forward in an unlikely run to the final. Murray himself could play just one match, a labored win over Netherlands’ Tallon Griekspoor, but his presence on the sidelines was unmistakable as his brother Jamie along with Kyle Edmund and Dan Evans kept punching above their weight.

Through all of this the quality of the tennis remained dizzyingly high. The much-panned schedule had forced the fatigued players from 18 countries to extend an already long season and delay their much-deserved vacations, but you wouldn’t have been able to tell that from their eagerness for battle. Closely-fought encounters were the norm rather than the exception, and the highlights reel of incredible shots from the tournament will probably be never-ending.

That said, even the tennis took a backseat at times to the sporting spirit that was consistently on show. Everything that makes Davis Cup special – the team camaraderie, the emotional ups and downs, the unbridled expressiveness of the players when going into battle with people they can call friends – was just as vivid this week in Madrid as it always has been through the 119-year history of the event.

And then there was the picture of Roberto Bautista Agut looking heavenward after registering Spain’s first win in the final, like a man who had just attained nirvana. In case you didn’t know, what Bautista Agut did this week pretty much bordered on the impossible. On Thursday he fled for home to attend to a family emergency, and not long after that the Spanish federation announced that his father was no more.

Nobody would have begrudged Bautista Agut taking the week (or maybe even the month) off to deal with that crushing development. And yet on Saturday the 31-year-old was back in the Spanish box, silently cheering on his teammates as they navigated an emotion-filled semifinal. Then on Sunday, just two days after his father’s funeral, Bautista Agut was called into action for Spain’s first match.

The man played his heart out, registering a 7-6, 6-3 victory over Felix Auger-Aliassime. And after clinching match point he threw his fist into the air and shouted “Papa!”, even as the tears started streaming down his cheeks. It was a gesture that seemed to make time stand still; everything in the world made sense at that moment, no matter who you wanted to win or why.

"When you have this moment it is difficult to describe with words – so many feelings, so many emotions you have never felt," Spain’s captain Sergi Bruguera said after the final. "Unbelievable. Imagine Roberto yesterday was in the funeral of his father, now he is here giving everything – the mentality, the spirit, giving everything for his team.”

Putting personal tragedy on the backburner for the sake of your team seems like the kind of sacrifice that only exists in fairytales. But Bautista Agut showed this week that he is no ordinary human, displaying a sense of commitment and solidarity that took the sport to a different realm altogether. His effort made us believe once again in the superhuman abilities of athletes; abilities that go well beyond hitting serves and forehands.

At this early stage it is difficult to predict how successful the modified Davis Cup format will be, or whether all the top players will continue playing it. But Bautista Agut, together with his Spanish team led by Nadal, have ensured that the tournament has retained its spirit and soul even as it enters a brand new era.

You can bet that no amount of format changes or Pique-style commercialisation will ever take that away.