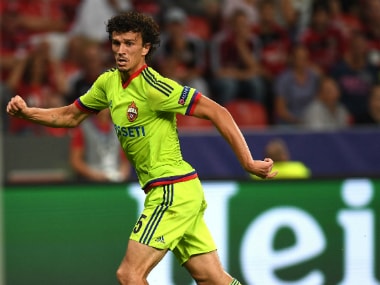 The Finland international was tested after scoring the equalising goal in CSKA's 2-2 draw with Germany's Bayer Leverkusen in a Champions League match on 14 September.

Eremenko has been given three days to appeal the decision.

"The analysis of the A sample revealed the presence of cocaine and its metabolites -- a stimulant that is classified under the category of prohibited substances in the World Anti-Doping Agency (WADA) 2016 Prohibited List under class S6 -- being prohibited in-competition," a UEFA statement said.

"The player was found guilty of being in breach of the UEFA Anti-Doping Regulations, Edition 2016. As a result, the UEFA Control, Ethics and Disciplinary Body decided to impose a two-year ban on Roman Eremenko, starting from 6 October 2016 date of the provisional suspension."