Cristiano Ronaldo carries Portugal to Euro 2016 finals, reiterating why he is among the best

Cometh the hour, cometh the man.

Forgive the use of a hackneyed cliché, but Cristiano Ronaldo’s performance on Wednesday night showed exactly why these tiresome adages are done to death in sports. World class players will always continue to defy age, odds and circumstances and let their talent shine through. With a goal and an assist to his name, Ronaldo stepped up when it really mattered to lead his team to the Euro 2016 finals.

When the opportunity presented itself in Lyon, Ronaldo didn’t just grasp it — he literally leapt for it. The first goal was one of those that you can re-watch a dozen times and still be marveled by its beauty. After taking a short corner, Raphael Guerreiro served up a beautiful cross. Ronaldo lost his marker, rose into the sky, towering over James Chester and headed the ball home. His almost gravity-defying jump and the bullet of a header were a reminder that he is one of the most superior athletes to have graced this sport. Watch the goal in slow-mo and you realize that Ronaldo’s incredible hang time is a testament to his prowess and physical strength. 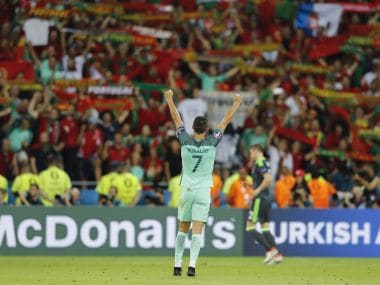 Cristiano Ronaldo celebrates at the end of the Euro 2016 semifinal match against Wales. AP

Within the space of three minutes in the second half, Portugal stomped on Wales’ fairytale run and killed any fight that they could have put up. After Ronaldo scored in the 50th minute, he miscued a low, driving shot into the box. Luis Nani instinctively slid in, and diverted the ball past Wayne Hennessey into the middle of the net.

The clash between Portugal and Wales had been billed as a contest between superstars Ronaldo and Gareth Bale. For most periods of the first half, it appeared that the latter might come out on top. The semi-final started as a cagey and jittery affair, but halfway past the opening 45 minutes, Bale decided to take things into his own hands. He neatly skipped past Danilo Pereira, only to have his shot safely hand in Rui Patricio’s gloves. His accelerated runs down the flank posed as the only goal-scoring threat for the Welsh, while on the other end Ronaldo had just one touch inside the box.

It was soon evident that Wales were sorely missing suspended Aaron Ramsey and Ben Davies as the midfield and defence suffered. But while Portugal were also without the services of William Carvalho and an injured Pepe, their bench strength did a commendable job filling in their big boots. Coach Fernando Santos once again proved his tactical acumen with yet another reshuffled starting XI. He brought in Guerreiro, who was fantastic as left-back and the trio of Adrien Silva, Renato Sanches and Joao Mario ahead of Danilo were better balanced than their opposite numbers in the middle. Bruno Laves, starting in place of Pepe, did a fair job neutralizing any Welsh scoring attempts. Patricio made timely saves to keep a clean sheet for the third time in the tournament.

“The team has become better, more solid, compact and united. And when that’s the case anything is possible. I'm proud of everyone in the squad. The 23 players in the squad are all fundamental. We have ways of playing against each opponent because every opponent is different,” Santos said in his post-match conference, highlighting his gameplan.

Bale could have easily scored in the first half had it not been for Portugal’s disciplined defence and they soon rode his wave of attack out, and wrested control towards the end of the first half. They passed the ball from side-to-side, holding possession to wear out their opponents. And it almost paid off just before the half-time whistle, with Silva setting up Ronaldo for a header that went inches over the bar.

Soon after the match restarted, the attritional strategy worked as Wales switched off for the briefest moment defensively, and this time Ronaldo had the perfect response to score the opening goal. It was his 61st international strike and ninth at the Euros, equalling Michel Platini’s record as the all-time top scorer at the championship. By the end of the 90 minutes he had attempted nine shots alone, exactly the same number that all Wales players had combined. Bale, who had three in the first half, would add no more in the second and faded away as the match went on.

“It's nice to break records but the most important thing was to reach the final, for the coaching staff and all my team-mates. I have broken many records and I will continue to do so, but the important thing was we made it through to the final. I’ve always dreamed of winning something for Portugal and it’s just one step away. Let’s keep dreaming,” the Real Madrid star said after the match. Twelve years ago, his dream of winning a title for his nation was thwarted by a scrappy Greece goal in the Euro 2004 final in Lisbon. The greatest European player of this era finally has another shot at lifting the European Championship trophy.