Madrid: Spanish football's top flight has recommended that all its clubs join Barcelona and Atletico Madrid in introducing pay cuts to staff including players to cope with a loss of income during the country’s state of emergency due to the novel coronavirus. 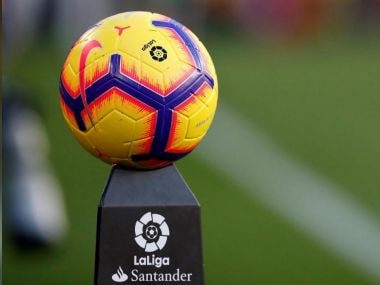 File photo of a football before a La Liga match. Image: Reuters

Spain is in its third week of lockdown and many companies have filed temporary pay cuts, referred to as an ERTE, to cope with the deepening economic crisis caused by the spread of the virus, which has infected 117,710 people and killed 10,935.

“We are urging clubs to initiate ERTEs due to the special measures the government has taken to avoid and alleviate the negative impact COVID-19 is having on our sector so we are able to guarantee that the sector recovers when the crisis is over,” said a statement from La Liga on Friday.

It added that professional football represented 1.37% of Spain’s GDP and was responsible for around 185,000 jobs.

Champions and current leaders Barcelona became the first Spanish top-flight club to give details of a pay cut when it announced a 70% reduction in player wages on Monday, with the first team squad taking an additional pay cut to ensure non-playing staff continued to earn their full salaries.

Atletico Madrid then announced a 70% pay cut for players in their first team, reserve side and women’s team, but said the first team squad and directors had made a donation to ensure that other members of staff still earned their full pay checks.

Major clubs in Germany and Italy have also announced pay cuts to playing staff although England’s Premier League has attracted criticism from the government for not cutting players’ wages while some have reduced the salaries of other staff members.