Khargone: The Khargone district administration in Madhya Pradesh has declared three kilometres area around a village as 'containment zone after a coronavirus case was reported from there, an official said on Wednesday.

Samples of a 65-year-old resident of Dhargaon village in Khargone, who died at a hospital in Indore on Sunday, tested positive for coronavirus on Wednesday. 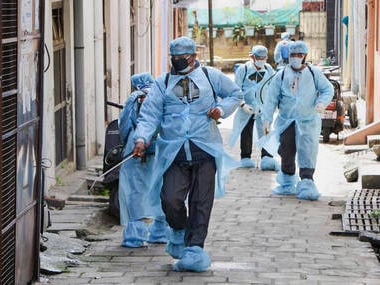 In view of it, Khargone collector Gopalchandra Daad ordered to declare three km area around the village as 'containment zone'. Besides, a buffer zone has been created in an area five kilometres around the village.

Transportation in this area will be totally banned, the order said, adding that residents under the containment area have been quarantined.

The administration is identifying those who came in contact with the deceased, an official said, adding that medical teams have been deployed in the village, located about 45 km from the district headquarters.

"As per the report received from government MGM Medical college laboratory, the 65-year-old man from Dhargaon village was suffering from coronavirus. He died three days back in Indore's MY hospital during treatment," Daad said.

The patient was initially admitted to Khargone district hospital after he complained of breathlessness, but as his condition deteriorated, he was referred to the MY Hospital in Indore on Sunday, he said.

"This is the first case of coronavirus in Khargone, the collector said.

With this case, the COVID-19 death toll in the state has gone up to six - three in Indore, two in Ujjain and one in Khargone.

So far, 86 coronavirus cases have been reported from the state.

Of these, 63 have been reported from Indore, eight from Jabalpur, six from Ujjain, four from Bhopal, two each from Shivpuri and Gwalior and one from Khargone, a health department official said.

Indore, which is an industrial hub and has been no.1 in cleanliness, has reported the highest number of 63 COVID-19 cases in the state so far.