Milan: A stunning goal from Spanish midfielder Fabian Ruiz gave Napoli a 1-0 win at Inter Milan in the first leg of their Coppa Italia semi-final after the visitors dominated a cagey game at the San Siro on Wednesday. 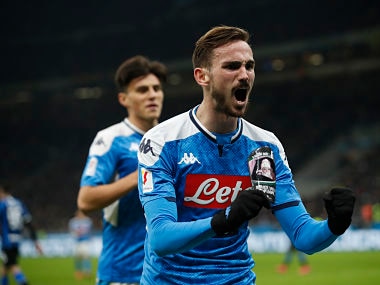 Ruiz curled a delightful left-foot shot past Inter goalkeeper Daniele Padelli in the 57th minute after a one-two with right back Giovanni Di Lorenzo.

Inter lacked energy after Sunday’s spectacular 4-2 comeback win against bitter city foes AC Milan in their league derby and Napoli bossed the midfield in the first half.

Dries Mertens fired over the bar with a first-time shot in the 16th minute and the visitors also came close on the stroke of halftime as Padelli denied Piotr Zielinski.

However, Padelli was powerless when Ruiz unleashed a sublime effort which left the keeper clutching thin air.

A weary-looking Inter threw men forward in the closing stages but Napoli held out comfortably to gain the upper hand ahead of the return leg on 5 March.

The home side missed their best chance to salvage a draw in stoppage time, when Napoli goalkeeper David Ospina smothered a close-range shot by substitute Danilo D’Ambrosio.

AC Milan host Juventus in the first leg of the other semi-final on Thursday, with the return scheduled for 4 March.