Catch all the live updates from Day 11 of the Commonwealth Games 2018 at Gold Coast.

A silver medal for reigning World No 1 Kidambi Srikanth

Let's not forget, he played an instrumental role in achieving India's maiden gold in the team event

Here is the final medals tally, with Australia finishing on top, followed by England and India.

And that's a wrap! A successful CWG for India, with 66 medals including 26 gold medals. Not to forget two historic gold medals in badminton and table tennis mixed team events. We hope you enjoyed our coverage throughout the Games. We'll see you next time. Take care!

Despite a much better fight in the second game, Satwik and Chirag couldn't match up to Ellis and Langridge's level. Anyway, it's a silver medal for the Indian men's doubles pair! The first-ever men's doubles pair to win a medal at CWG

A lot to learn from this campaign!

4 gold medal points for Ellis and Langridge. The Indian shuttlers were caught napping at the net.

And Satwik makes a silly error at the net. He rushes to hit a quick push from the front. Ellis and Langridge were gifted a crucial point. They lead 19-16 in the second game.

Satwik and Chirag close the gap on the English pair's lead! It’s 16-14 to Langridge and Ellis in the second game.

Langridge and Ellis again open up a four-point lead over the young Indian shuttlers. It’s 15-11 now. Satwik and Chirag must find a way to stop Ellis from attacking.

The World No 22 from England are just too good. They lead 11-5 at the mid-game break of the second game. Chirag needs to return quickly and help Satwik from the mid-court. The Indian duo is ranked at 21 in the BWF Rankings.

Langridge and Ellis take the first game 21-13. The Indian duo needs more power in their strokes to push their English counterparts. The English pair is high on confidence and they are playing some quick rallies. 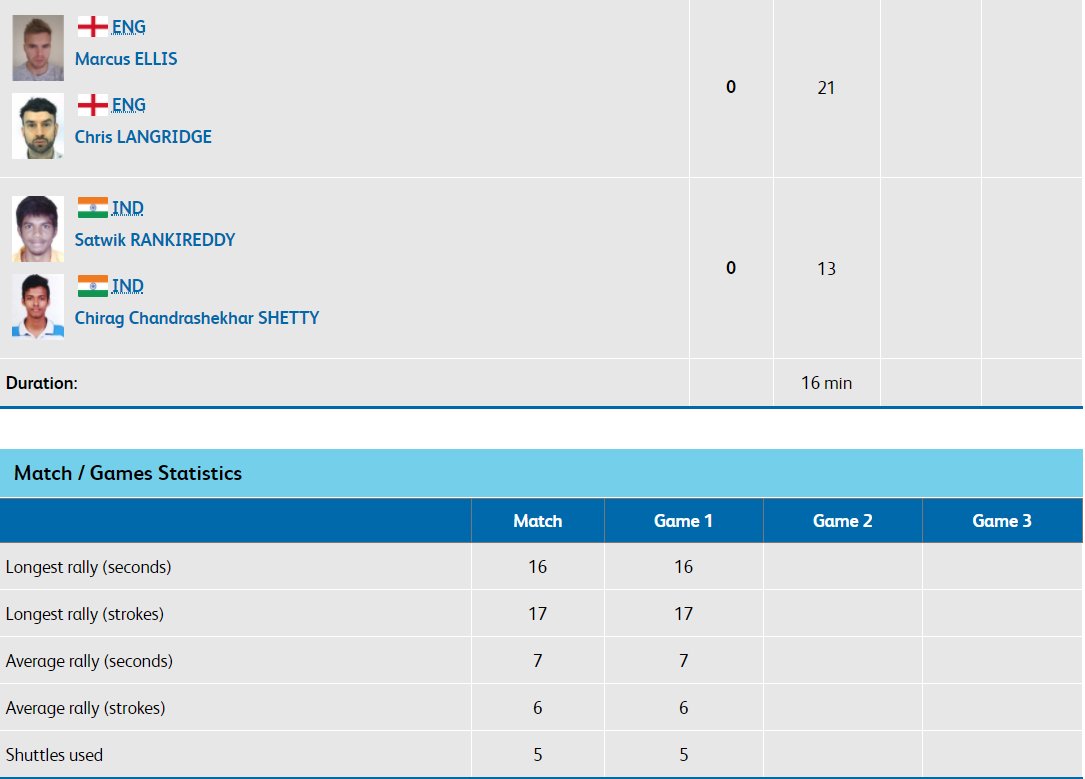 The English pair stretched their lead to 14-9 before making it 17-11 in no time. Satwik and Chirag are on the backfoot in the opening game. The pressure is on the Indians.

Among other success stories, defending champions Dipika Pallikal and Joshna Chinappa stormed into the final of women's doubles category while Dipika and Saurav Ghosal clinched silver in the mixed doubles, even as both the men's and the women's hockey teams lost to England in the bronze medal matches. However, Mary, a five-time world champion, defeated Kristina O'Hara of Northern Ireland by a unanimous 5:0 verdict to take the women's 48kg title in probably her final CWG campaign.

Vikas defeated Dieudonne Wilfried Seyi Ntsengue of Cameroon by a 5:0 unanimous verdict in a close contest in the 75kg category, while Gaurav (52kg) won by a split 4:1 verdict against Brendan Irvine of Northern Ireland.

Meanwhile, India's Manish had to be content with silver in the men's lightweight (60kg) division after losing 2:3 to Harry Garside of Australia in a hard-fought final.

Amit finished with the silver medal after losing 1:3 to England's Galai Yafai in the final, while Satish lost the final of the 91kg category, losing 0-5 by unanimous verdict to England's Frazer Clarke. This is the first time India got a silver medal in the super heavyweight category in the CWG.

In athletics, javelin thrower Neeraj delighted the country as he registered his season's best performance of 86.47 metres to win the final, while Vipin Kashana, the other Indian in the fray, took the fifth spot with an attempt of 77.87m.

In badminton, it was yet another superb show, with at least a gold medal assured as World No.3 Sindhu will meet seasoned compatriot and World No.12 Saina in an all-Indian women's singles final on Sunday.

In the men's doubles, Satwik and Chirag thrashed Sri Lanka's Sachin Dias and Buwaneka Goonethilleka 21-18, 21-10 to enter the final.

Ashwini and Satwik had a poor day in the mixed doubles, losing their semi-final as well as the bronze medal playoff.

In squash, the women's doubles pair of Dipika and Joshna beat England's Laura Massaro and Sarah-Jane Perry 11-10, 11-5 to seal their place in the final.

However, in the mixed doubles category, Dipika, who then partnered Saurav Ghosal and settled for a silver, losing 8-11, 10-11 to Australia's Donna Urquhart and Cameron Pilley in the final.