It was only a matter of seconds. But India’s women’s basketball squad will hear the jubilation of those long, slow ticks for the rest of their lives.

These were the last seconds of competitive international action for the team, at the Division B final of the 2017 FIBA Asia Women’s Cup on 29 July, in front of entertained home fans at the Sree Kanteerava Stadium in Bengaluru. India had started slow against their opponents Kazakhstan, falling down by 14 midway in the second quarter. But a big second half performance by the team’s biggest star — Jeena Scaria — brought India back into contention and set up the memorable heroics which would follow.

With less than 24 seconds on the clock, the Indian defence collapsed after some deft passing by Kazakhstan, and Oxana Ossipenko was left open to tie the scores at 73-all. As the clock ticked, India’s all-round talent Shireen Limaye dribbled the ball up the court, kept dribbling from one side of the three-point arc to the other, listening to the fans chant the last few seconds of the game — “Five… four… three… two…”— and on the final beat, took a step-back two-pointer.

Time expired. The ball went through the basket. Limaye threw her hands up in the air in jubilation. India won the game 75-73 and the Division B title, securing their place back to Division A in the tournament’s next iteration. It was a storybook ending.

And then, silence. While India’s men’s squad has been in action regularly over the past year, the senior women’s team hasn’t been together in national colours since Limaye’s unforgettable game-winner. 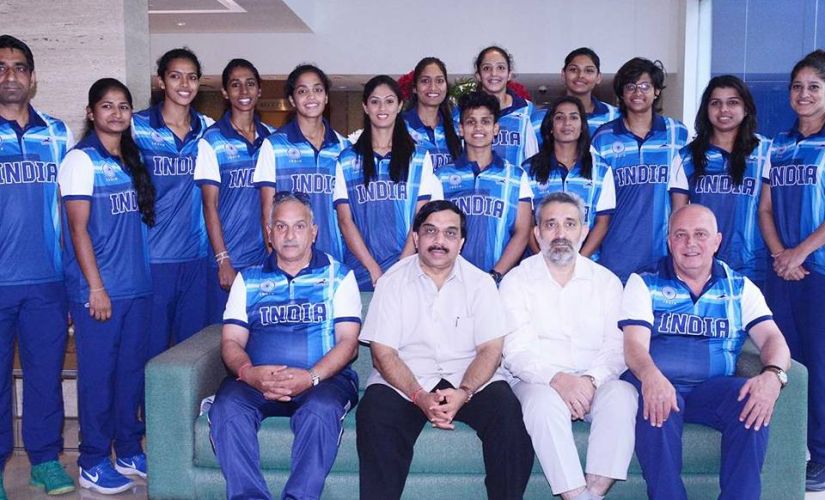 Indian women's basketball team, with support staff, which will be competing at the Commonwealth Games. Image courtesy: Facebook @Indianbasketball

Until now, that is. From 5-14 April, 2018, Team India’s contingent of men and women’s teams will both take part in the 2018 Commonwealth Games in Gold Coast, Australia. The Women’s team departed for Australia several weeks in advance for an exposure and training trip at the Runaway Bay Super Sports Centre in Queensland. India were drawn in Pool B and will play their preliminary round games at the Cairns Convention Centre.

The team will feature many of the heroes from the FIBA Asia Cup second-division triumph, including Scaria, Grima Merlin Varghese, Raspreet Sidhu, and Rajapriyadarshani Rajaganapathi. Missing in action is India’s most experienced player and captain, Anitha Paul Durai. But taking charge in her absence will be the hero of the Kazakhstan final herself — Limaye — who has been handed captain’s mantle and will hope to inspire the squad to more heroics at this prestigious stage.

Zoran Visic, the Serbian head coach who led India’s senior and U-16 women’s squads to lower division victories at their respective FIBA Asia Cups in 2017, will continue at the helm as the team’s head coach.

This will be the first time since 2006 — when the Commonwealth Games were held in Melbourne in Australia — that basketball will be featured in the event again. It was all-Oceania dominance 12 years ago as Australia and New Zealand played in the finals and the hosts surged to a 77-39 victory. India didn’t make it out of the group stage but did manage to pick up a victory against Mozambique, 58-54.

India is in the lower pool. For them to move on to the knockout stage, they will have to finish among the top two of the pool and play against the bottom two teams of Pool A in the Qualifying Finals in Townsville. If they win their Qualifying Final, they will qualify for the Semi-Final/Final to be held on 13-14 April at the Gold Coast Convention and Exhibition Centre.

India’s most talented player is probably Kerala’s 24-year-old forward Scaria. She was the most efficient player for the squad at the FIBA Asia Cup and will have a hand in India’s all-round success on both ends of the floor. Limaye (23) is a similar multi-talented player, and even though she may not be as consistent a scorer as Scaria, she makes up for it with her ability to create, rebound, and defend. The team also features Varghese, who will turn 23 this week and was the breakout performer at Bengaluru last year.

Barkha Sonkar (21), the point guard who attends the Hillsborough Community College in the USA, was recently named in the ‘All Suncoast Conference’ Second Team for her performances. The senior-most player for this young side is sharpshooter Raspreet Sidhu (28), a guaranteed starter and consistent performer. Watch out also for the 6-foot-2 Rajaganapathi to have her moment to shine in the post.

According to the FIBA World Rankings, all four teams in India’s pool are ranked around the same stretch between 37-48th in the world. But the rankings don’t accurately portray the gulf between the teams. New Zealand are likely going to be favourites to finish at top place in the group. A slightly different Indian side played NZ at last year’s William Jones Cup and fell to a 75-52 loss. India will have much better opportunities to pick up wins against Jamaica and Malaysia, the latter of which have been India’s opponents in many FIBA Asia events in recent years.

If still on a roll with the positive momentum of their last basketball outing, India can optimistically finish in the top two of their group and at least get a shot at a Qualifying Final. From there onwards, just like Limaye’s historic shot, everything else will be a miracle.