Indian lifters will feel the weight of expectations as they start as top medal contenders in several categories in the weightlifting competition at the Commonwealth Games 2018.

India have fielded 16 lifters -in each of the eight weight categories in men’s and women’s events to be staged at the Carrara Sports and Leisure Centre in Gold Coast. Nigeria, Australia, Malaysia and Samoa are the other countries which are expected to challenge the Indians. 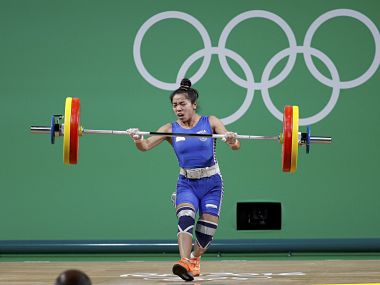 Indian men had three gold medallists at the Commonwealth Championship last year which included Satish Sivalingam in 77 kg, Ragala Venkat Rahul in 85 kg and Pardeep Singh in the 105 kg class. Satish won the gold medal at the Glasgow Commonwealth Games with a total lift of 328 kg. Going by the recent form, his closest rivals will be Francois Etoundi of Australia and Abdul Mubin Rahim of Malaysia. Both of them finished way below Satish in the Commonwealth Championship. “My recent performances have been good and I am hopeful of defending my gold medal. Therefore, in my training, I am trying not to exert myself too much to avoid any injury,’’ Satish, who along with the entire weightlifting squad has been undergoing a preparatory camp in Melbourne, told Firstpost.

In the 85 kg category, Ragala’s main opponents will be Don Opeloge from Samoa and Mohamad Fazrul Azrie Mohdad from Malaysia. “Traditionally, we have never done well in higher weight categories but I feel we have a great chance of finishing on top in the 105 kg where Pardeep is looking good. Though he has to be wary about Sanele Mao of Samoa and 2014 Commonwealth Games champion David Katoatau of Kiribati,’’ Vijay Sharma, the chief coach of the Indian weightlifting team, told Firstpost. Katoatau is a household name in global events, thanks to his dance routine which he performs after lifting a weight to highlight the perils of global warming threatening his tiny island nation. Pardeep spoilt the party for both Mao and Kataotau in the Commonwealth Championship but both these lifters have better track record than the Indian in the past.

In Indian weightlifting, the women have always enjoyed the spotlight, thanks to the exploits of Karnam Malleswari and Kunjarani Devi. And yet again, Mirabai Chanu grabbed the attention of the nation lifting the world championship title last year in the USA. Though the field was depleted without the presence of lifters from China which is banned for its poor record on doping, Chanu created a world record in the 48 kg with a total lift of 194 kg. “If I can repeat this performance, I will be assured of the gold. At the moment, the field does not look too tough,’’ Chanu told Firstpost.

Chanu was a comfortable winner in the Commonwealth Championship last year finishing way ahead of her rivals from Papua New Guinea and Sri Lanka who finished in the second and third positions respectively. “More than the Commonwealth Games, my focus is on the Asian Games where there will be stiffer competition,’’ said the world champion. However, she is training at full steam hoping to bury the ghosts of the Rio Olympics where despite being in good form in lead up to the event, she had faltered. Nothing worked for Chanu in the Olympics as she failed to lift the weight in any of her three attempts in clean and jerk section.

Sanjita Chanu, gold medallist in the 2014 Commonwealth Games in the 48 kg has now moved to the 53 kg but will also start as one of the top gold medal contenders. She will have to stave off challengers like Marie Ranaivosoa of Mauritius and  Loa Dika Toua of Papua New Guinea though both of them have not come anywhere close to Sanjita’s best total lift of 195 kg. The other strong medal contender from India is Punam Yadav in the 69 kg though she will have to lock horns with a strong field consisting of lifters from Fiji and England.

Malleswari had helped Indian weightlifting gain popularity with her bronze medal at the 2000 Olympics in Sydney. Since then the sport had seen a downward spiral with poor performances at the global events and repeated doping offences by the lifters which prompted the games' governing body to derecognise the national federation. Thankfully, the sport in India managed to redeemed itself with eight medals at the 2010 Commonwealth Games in Delhi.

This was followed by an improved showing four years later in Glasgow where three Indians lifters bagged gold medals and finished with a total haul of 12. “Better infrastructure and support have helped in turning the fortunes of Indian weightlifting. The entire contingent has arrived in Australia almost a month prior to the Commonwealth Games and this will definitely help the lifters to acclimatise themselves with the conditions,’’ asserts Sharma.

Hopefully, the road to redemption for Indian weightlifting will continue and Gold Coast will be the perfect platform for many of the Indian lifters to make a mark at a bigger stage.