Commonwealth Games 2018: Virdhawal Khade returns to the pool in the 'best shape of his life' after long hiatus

When the Singaporean and Indonesian swimmers saw India's Virdhawal Khade at the recent 49th Singapore National Age Group Swimming Championships, they just assumed he had become a coach.

These were men Khade had competed against back at the Asian Games in 2010. But having not raced for a few years, it was natural that the swimmers thought he was now a coach, rather than competition.

By the time the Singapore Championships ended, Khade had made sure the Asian swimming fraternity knew he was back on the circuit. And not as a coach. "I went there to test myself and see how well I was swimming ahead of the Commonwealth Games. I returned with two medals. So I was very happy.

"Most of the other swimmers hadn't seen me for a long time, so they thought I had gone into coaching," says Khade, during a promotional event for Speedo.

Khade's career graph is one that takes some explaining.

He started his life in the spotlight by becoming the youngest swimmer from India to make it to the Olympics at the age of 16 at the 2008 Beijing Olympics.

Two years on, he showed his calibre with a bronze medal at the Asian Games.

But then came the slump which saw him miss the 2012 Olympics, the 2014 Commonwealth Games and the Rio Olympics.

"I don’t think any Indian swimmer has experienced the things that I have. I remember the time when I qualified for the Olympics in 2008, I couldn’t afford to buy the specific food a swimmer needs. I used to make do with just biscuits, and would still win events. It wasn’t as terrible as you'd imagine. But I’ve come up from such circumstances and made it happen. And after the Olympics, things changed a lot. For the better. Winning a medal at the Asian Games in 2010 was a huge thing for me. Not to mention the Arjuna Award a year later.

His job as a tehsildar with the Maharashtra Government didn't help matters.

"A tehsildar is an executive magistrate of the taluka. When I took the job, I didn’t know my work would be so heavy. In other states, when the state gives you a job, they give you a salary, but you can focus on your sport.

"Earlier, I was posted in Borivali with the encroachment removal authority. My job was to take care of slum rehabilitation work and get rid of illegal constructions.

"Then I was posted to the Malvan region. When I started working it felt like there’s a much bigger world out there. There are so many problems in the world. Outside the swimming pool, there is such a big world. It was an eye-opener. I enjoyed it for a while," he says, as his voice trails off.

Quiz him on that phase of his life and he says, "I didn’t swim... When I was in Malvan for close to a year, I didn’t swim at all. I had put on 20 kg. Since there was so much workload, I didn’t want to make that extra effort to wake up early in the morning to train. That one year threw everything off.

6 month transformation ✌ 85 kilos today compared to ➡ 104 kilos in the 2nd picture . . Hard work + eating right + enjoying what I was doing = success . Winning the #nationals along the way was nice too ✌ It's not easy but anyone can do it with consistent hard work and patience. #indianswimming #teamindia #swimmer #gettingstronger #fitlife #kolhapuri

"In 2010, when I won bronze in Guangzhou, I decided that in the next Asian Games I want to win a gold medal. But that never happened. In 2014, I was busy with my election duty instead since the Vidhan Sabha elections were on," he says.

But just when it appeared his swimming career was over, he was transferred back to Mumbai in November last year and Khade started taking his first definitive steps towards making a comeback.

"Once I got transferred back to Mumbai in November, I started taking time out for myself. I started training, swimming twice a day and going to the gym. I started with my food; I started watching what I ate. That played a big role in helping me get back in shape. I worked very hard in the gym. The one place that I think I earlier lacked was that I was weaker than my competitors abroad. I got a lot stronger than what I used to be. At Gold Coast, I am doing only the 50m events where strength matters a lot. I am a lot stronger now so hopefully that will help me swim faster.

"I think in this off time from swimming, I have gotten my drive back. Since I started training again, I feel like I am 10 years younger. I feel I am training that little bit harder, wanting it a little bit more than I did earlier.

"You swim six hours in a day and spend two hours in a gym, so you burn a lot of calories. So whether you like it or not, it (weight) will go. In six months, I have gotten back to what I think is the best shape of my life," Khade proclaims. 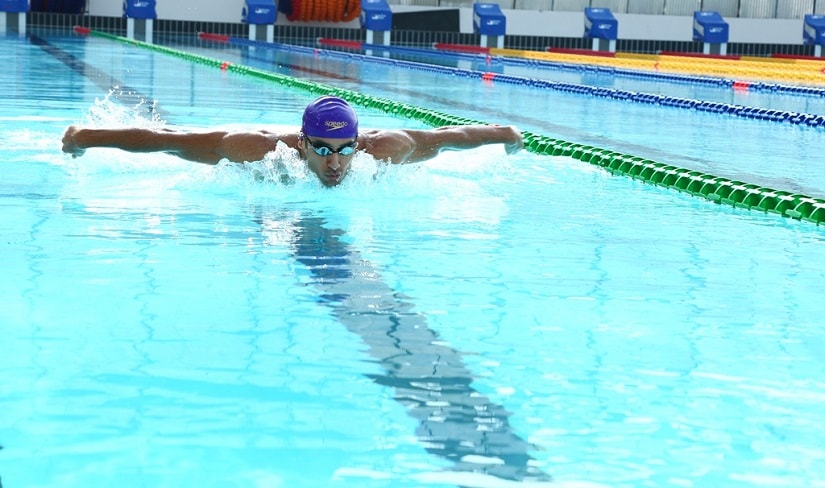 His comeback bid though ran into choppy waters back home. His father was dead against the idea of him taking up the sport again. Ironically, it was Khade Sr who had pushed him in the direction of swimming at the age of five.

"I started swimming at the age of five only because my father wanted me to become a sportsman. I never wanted to start swimming. It was my father’s decision to put me into it. When you are a five-year-old kid you don’t want to work hard. You want to do what other kids are doing," reveals Khade.

"But now when I told my father I wanted to start swimming again, he was against it. The comforts that a government job brings was just a part of his reasoning. When you are pursuing a sport professionally, you need to put in a lot of money till you get a sponsor. We had already been through that expensive path. Then getting back and putting in so much money, without the guarantee of getting it back -- That’s a big risk!"

Khade, who will participate in the 50m freestyle and 50m butterfly events at the 2018 Commonwealth Games, is quite realistic about his chances at Gold Coast.

He points that the Australians will have three quota spots by virtue of being hosts, while the usually strong English swimmers too will have more representation, considering they will compete under England, Scotland, Wales and Northern Ireland flags. Add South African and Canadian swimmers to the mix and you have a formidable field. And there are also swimmers from nations like Singapore, who have grown in stature over the few years.

Ask him if the Asian Games or the Commonwealth Games represent a better chance of winning a medal for him and he says, "The Asian Games, because I have more time to train. The guys racing at the CWG have had four years to train minimum, I have had only a few months. So I definitely need more time to race with them."

While Khade's selection in the Gold Coast-bound team is a personal victory for the swimmer, he frets about what it means for Indian swimming.

"I started swimming again seriously and in two months we had the senior nationals, where I medalled. Even though it was good for me, I think it was bad for Indian swimming," says Khade.

"I think the kids these days don’t want to work hard. They just want it too easy. I just don’t see the hunger in most of the kids that I see every day. That needs to change.

"In my younger days, if the coach gave me a particular target, I would not just stop at that. I would want to do better than that. There have been times when I have surprised the coaches by doing something they didn’t think I would be able to."