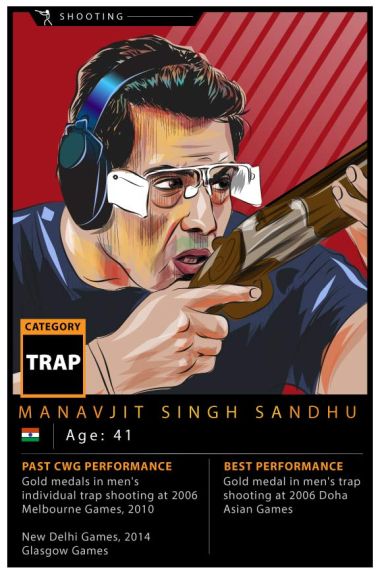 Manavjit Sandhu has, for long, been a role model for young Indian shooting enthusiasts who aspire to take up the sport professionally.  For over the past two decades, the Amritsar-born shooter has won one medal after another at the international level.

The Commonwealth Games in particular have been a happy hunting ground for the shooter. He has won three individual and two team golds at the event since he made his first appearance at the CWG in 1998. However, his first individual gold medal came in 2006 Melbourne Games. It was a special year for the Indian as he also won gold medals in trap shooting at 2006 Doha Asian Games and 2006 ISSF World Shooting Championship in Zagreb.

His remarkable feat helped him earn the Rajiv Gandhi Khel Ratna award in 2006-07, the highest honour given for achievements in sports. He followed up the win in Melbourne with gold medals at New Delhi in 2010 and Glasgow in 2014. Manavjit also won six gold medals at different ISSF World Cups.

He achieved World No 1 rank in 2006 after becoming the world champion. However he was unable to maintain the position by the time the next CWG came around. Despite entering the event as World No 3, he had no problems in winning the gold medal at that event.

Manavjit developed interest for the sport at a very early age due to his father being a top professional himself. Gurbir Singh Sandhu, Manavjit's father and inspiration was an Olympian and had also won the Arjuna award.

Manavjit too had the honour of representing India at the Olympics four times  - 2004, 2008, 2012 and 2016. However, unlike CWG he wasn't able to bag a medal in the Games. In the latest Olympics in Rio, Manavjit failed to qualify for semi-finals after he finished 16th in the men's trap qualification round.

Manavjit couldn't finish the qualifying round in the latest ISSF World Cup at Guadalajara, Mexico that was held in March and hence had to return empty-handed.

However, he did claim the gold medal in men's trap shooting during the previous national championships, thereby cementing his position as India's best trap shooter going into the Gold Coast Games.

Having developed a habit of securing gold medals in the Commonwealth Games, Manavjit will head to Gold Coast with an aim to to continue his golden streak at the Games. He may not be the youngest shooter contesting for a medal but Manavjit Singh Sandhu will step into the shooting range at Gold Coast knowing exactly how to strike gold at that level.