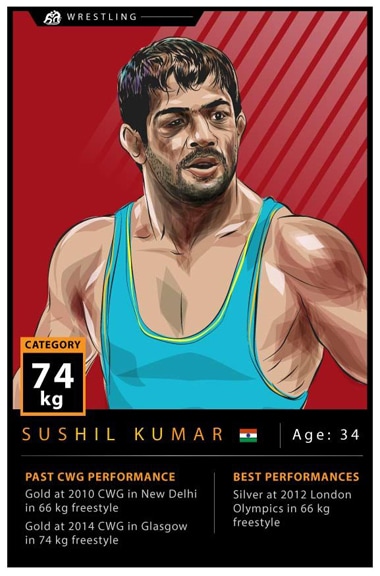 India's greatest individual Olympian of all time, or a controversial wrestler? Take your pick on how you want to look at Sushil Kumar. But whatever be your opinion, there is no denying that Sushil has been one of the most impactful sportspersons from India in recent times, if you discount the Virat Kohlis and Rohit Sharmas of the world.

He is a two-time Olympic medallist, the only athlete from India to win two individual Olympic medals, that too back-to-back. He is one of the most decorated athletes in the history of Indian wrestling and such has been his aura and dominance over the years that you tend to expect a medal everytime you see Sushil's name in an Indian contingent.

The fact that Sushil has been out of action from international wrestling for more than three years could have been a major concern at a stage as big as the Commonwealth Games, but what gives the Indian wrestling fans confidence is that Sushil made a fine return to international wrestling with a gold at the Commonwealth Wrestling Championships in Johannesburg in December last year. He defeated Akash Khullar of New Zealand by pinfall in the final of the 74 kg category.

Earlier, Sushil had won the National Championships in November, albeit under extremely controversial circumstances, with three of his opponents – in the quarter-final, semi-final and final – giving him walkovers, some of them even going to the extent of touching his feet before backing out. It took Sushil less than three minutes and only two bouts to win the Nationals gold, which was widely criticised as a sham and an abominable show of hero-worship by wrestlers like Parveen and Sachin Rathi. It was also a scant test of a wrestler returning to serious action after a hiatus of three years.

The Commonwealth Championships gold in the following month would have allayed some of the doubts around Sushil's match fitness, but the Nationals fiasco impelled one to question if Sushil's pedigree and stardom is taken as a passport for VIP treatment. Bollywood actor Farhan Akhtar, who essayed the role of 'Flying Sikh' Milkha Singh in the ace sprinter's biopic, Bhaag Milkha Bhaag, was among many who severely disapproved of the way Sushil won the Nationals. Akhtar tweeted, “I hold @WrestlerSushil in high regard for all he has achieved through hard work, discipline, blood and sweat. Sincerely hope he does not accept the gold in this manner. It’s not sportsmanlike.”

The tussle between Sushil and Narsingh Yadav for a place in the Indian squad for the 2016 Rio Olympics also brought into the forefront the issue of Sushil's Olympic pedigree allowing him to ask for benefits that the others hardly got. Sushil had to shift to the 74 kg category after the world wrestling body decided to do away with the 66 kg category in which he won his two Olympic medals and golds at the Commonwealth Games, World Championships and Asian Championships in 2010.

Narsingh had won bronze in the 2015 World Championships in Las Vegas in the 74 kg category, which secured India's quota for the Rio Games. Sushil missed the event with a shoulder injury. Now, according to the tradition followed by the Wrestling Federation of India (WFI), the athlete winning the quota place for the country is given the chance to represent the country in the Olympics. Thus Narsingh was named ahead of Sushil in the Indian squad. Sushil's injury woes that kept him out of match practice, and Narsingh's experience in the 74 kg category would also have influenced the WFI's call to give the latter the nod over Sushil.

However, an aggrieved Sushil refused to accept the decision and demanded a play-off to determine the better athlete between Narsingh and him to go to Rio, even going to the extent of approaching the sports minister and the Delhi High Court. Sushil though did not get the verdict that he wanted, and missed the bus to Rio. In a twist of fate, however, Narsingh was expelled from the Olympics and handed a four-year ban for doping by the Court of Arbitration of Sports acting on the World Anti-Doping Agency's (WADA) appeal against the clean chit given to Narsingh by India's National Anti-doping Agency (NADA).

Narsingh had allgeged sabotage, saying that his food was spiked with a banned substance, and his brother Vinod Yadav took a veiled dig at Sushil, telling CNN-News 18 that the 'culprit' was from the same training ground (akhada) as Sushil. Was he acting on Sushil's behest was the question.

The Sushil-Narsingh tussle divided public opinion, with a group arguing that renown should not be reason enough for preferential treatment and that current form should be taken into account. Those sympathetic to Sushil's cause pointed out that he had not asked to be sent directly to the Olympics in place of Narsingh, but only that a trial be conducted to determine the better medal prospect in the 74 kg category. They argued that an athlete who had proven his class and capacity on the big stage on so many occasions, should not be begrudged a chance to earn an Olympic berth.

That was, however, not the end of the controversies that Sushil was to face. The Delhi wrestler qualified for the 2018 Commonwealth Games in the 74 kg category by beating Praveen Rana and Jitender Kumar in the selections trials held in December last year. However, the Commonwealth qualification was not all sweet for Sushil, as he was accused by the Praveen Rana camp of instigating his supporters to assault Rana's brother and threatening to harm Rana himself, for daring to take the mat against Sushil. This led Rana to lodge a police complaint against Sushil and his 'supporters' and also file a written complaint with the WFI. The WFI indicated that Sushil could have been suspended and withdrawn from the Commonwealth Games had the Delhi Police filed a chargesheet against him.

Sushil would now have to put these controversies behind him and lead India's gold quest in Gold Coast. He has not been in a lot of action since the Glasgow Commonwealth Games in 2014, and that may be bit of a worry. He has warmed up for the big fight with the Commonwealth Championships gold in December, and needs to guard against letting the momentum drop.