India’s medal chances at the 2018 Commonwealth Games at Gold Coast have been jeopardised even before the event has kicked off. With two weeks to go for the Games, there are over a hundred members of India’s contingent to Australia whose visas have still not been approved.

According to a list of officials and athletes prepared by the Indian Olympic Association (IOA), there are 109 visa applications which are yet to be “approved”, The Times of India reported. 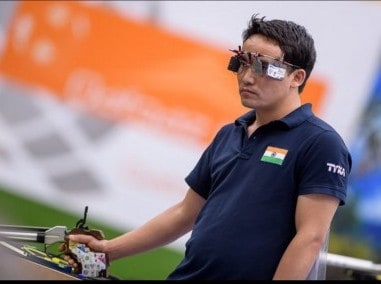 Jitu Rai is among the athletes stranded in India and awaiting visa approval. Image courtesy: Twitter

The Basketball Federation of India (BFI) had planned to send both the men’s and women’s teams to Gold Coast three weeks in advance to acclimatise and play warm-up matches.

However, their plans have gone astray as five players, senior coaches and team officials are still stranded in New Delhi, the The Hindustan Times reported on Wednesday. As a result, 19 out of 24 male players have reached Australia while a majority of the coaches are in India.

The basketball contingent was scheduled to reach the Runaway Bay Super Sports Centre in Gold Coast on 12 March. They were scheduled to play some exposure matches with local teams before the start of the mega event on 5 April.

“The plan has gone haywire because of five of them not getting visas. We are trying to make the most of the available resources and the (stranded) coaches are sending players (who have reached Australia) their training schedule on email,” BFI secretary-general Chander Mukhi Sharma was quoted as saying by The Hindustan Times.

“We all applied for visas at the same time but don’t know why some of us didn’t get it. We paid in advance for the team’s stay in Gold Coast and are now losing money,” Sharma said.

However, the Australian federal government had intimated all the participating nations that all travelling individuals must obtain visas to attend the Gold Coast event well in advance.