Wary of controversy, the sports ministry will not allow family members of any athlete to travel with the Indian contingent for the Commonwealth Games and will also put a stop to officials' "fun rides".

The Indian Olympic Association (IOA) has forwarded a list of 222 athletes and 106 officials, including 57 coaches, 19 managers and 41 others, for the Gold Coast event. 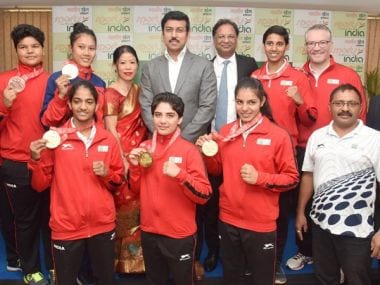 Sports Minister Rajyavardhan Singh Rathore is yet to clear the list and it is learnt that ministry is reviewing the list of 41 other officials.

"Ministry will take a decision on the contingent in a couple of days but we have been instructed to strictly review the number of officials while keeping the focus on players. Officials who won't be able to stay in the Games village or enter the sporting arena. Why should we spend government money on them," a source in the ministry told PTI Bhasha.

"We are examining the others category which includes 41 officials and it is likely to be reduced by half. There have been complaints that officials go on free fun rides but it won't happen this time. We will try to ensure that the player-official ratio is maintained," said the official.

"Why should family members of the athlete, no matter how big star the player is, will go on government expenses as mentor or manager. If they want them, they can take on their own expenses and I am sure they can afford this," the official added.

The official also said that this does not mean that government is cutting down support to the athletes as ministry has sanctioned 10 extra coaches for different disciplines as requested by concerned federations.

"Some federations have asked us to accommodate coaches as their quota was full so we have sanctioned 10 such extra coaches who are essential for players. It includes one in hockey, five in boxing, one in Squash (female coach) and one in weightlifting. All expenses of these extra officials will be borne by the government," said the official.