Expectations would be high from Indian badminton's star-studded singles line-up but away from the spotlight, Satwiksairaj Rankireddy and Chirag Shetty are aiming to end the country's men's doubles medal drought at the Commonwealth Games in Gold Coast in just their debut appearance.

At 17 and 20 respectively, Satwik and Chirag form a formidable pair that has proved its mettle in international badminton, often punching above their weight, only to fall short of podium finishes. 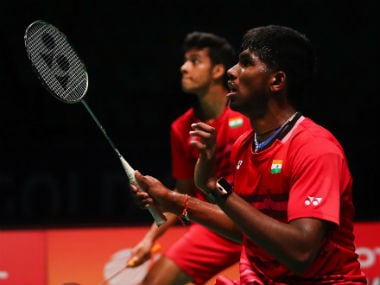 "It was my father's dream to see me play at the Commonwealth Games and so when I heard I was selected for the event, it made me so happy. It's a dream for every sportsperson and I think we are pretty confident that we can win a medal, looking at the way we have been playing in the last six months," Satwik told PTI.

Chirag added: "No Indian men's pair has won a medal at the CWG. If you look at the pool, Olympic silver and Olympic bronze medallist from Malaysia and England respectively are playing but we have been playing well, so we are confident of a good show."

At a little over six feet, the youngsters make for imposing figures on the court, which is largely dominated by diminutive Asian shuttlers. Their height was one of the reasons why Malaysian doubles coach Tan Kim Her paired them together after assuming office in 2016.

For the first six months Satwik and Chirag struggled to play as a pair as their personalities are as different as chalk and cheese. Both come from two completely different backgrounds. While Satwik comes from the tiny town of Amalapuram in the East Godavari district of Andhra Pradesh, Chirag hails from Mumbai.

"Our coach told us to stay together, go out together and now we have become good friends, he knows me well now and I know all about him as well."

For the duo, it was the Tata Open India International Challenge win that brought them into limelight in 2016. They also won in Mauritius and Bangladesh, but their biggest win came next year when they clinched the Vietnam Open international challenge where they toppled former Olympic and world champion Markis Kido and his partner Hendra Gunawan en route to the title.

They also qualified for the Glasgow World Championship and managed to reach the quarters at the Korea Open and the French Open.

This year, Satwik and Chirag made it to the semifinals at Indonesia Masters and could have been at the All England quarters if not for a few controversial service faults against London Olympics silver-medallist pair of Mathias Boe and Carsten Mogensen.

The disappointment behind them, Satwik and Chirag set their sights on the Commonwealth Games. Chirag says he had heard stories of Prakash Padukone winning the gold in 1978 Edmonton Games during his initial days at the Uday Pawar Badminton Academy.

"My coach Uday sir had told me that it was a huge thing at that time because it was one of the first medals for Indian badminton in such a big event. So, we are very overwhelmed to be a part of this team," Chirag says.

Their consistent performance also saw them knocking on the top 20 ranking.

"We are happy with the way we are playing. Our target for this year was to play at least the second round but we played semi-finals already in Indonesia.

"We didn't expect that we will so quickly make it to the top 25. We should reach at least be in top 15 by the end of this year," Satwik said.