Seasoned goalkeeper PR Sreejesh made a comeback while former skipper Sardar Singh was dropped from the 18-member Indian hockey squad led by Manpreet Singh for the upcoming 21st Commonwealth Games in Gold Coast.

The Indian team is in Pool B along with Pakistan, Malaysia, Wales, England and will begin their campaign on 7 April against Pakistan. 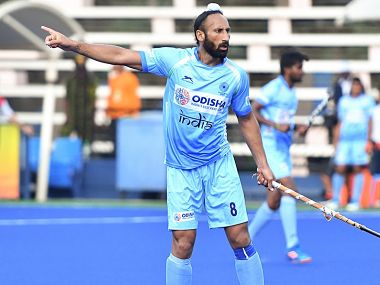 Sardar Singh has been shown the door by the selectors. Image courtesy: Twitter/@TheHockeyIndia

While Manpreet dons the captain's armband, the responsibilities of his deputy will be shouldered by Chinglensana Singh Kangujam.

It was under Manpreet's leadership the Indian team lifted the coveted Asia Cup 2017 followed by a bronze medal feat at the Men's Hockey World League Final in Bhubaneswar, last year.

Veteran custodian Sreejesh is back after having suffered a medial collateral ligament (MCL) injury during the Azlan Shah tournament in 2017. His brilliant show during the New Zealand tour saw him get his rightful place back.

He will be backed by the 22-year-old talent Suraj Karkera who played a crucial part in the team's good show in Bhubaneswar last year in his senior counterpart's absence.

Sardar's exclusion was on expected lines as he performed below-par at this year's Azlan Shah tournament. However, a few eyebrows were raised with Ramandeep Singh being dropped despite his decent show in the same tournament.

Youngsters Dilpreet Singh and Vivek Sagar Prasad, who made their international debut during the New Zealand tour have been rewarded with this opportunity for their good show. Both the players scored in important games.

India's midfield will see skipper Manpreet Singh in the lead role, ably supported by the experience of Chinglensana along with young blood in Sumit and Vivek.

The Indian attack will feature a lethal combination between experience and youth as SV Sunil, Akashdeep Singh, Mandeep Singh, Lalit Kumar Upadhyay, Gurjant Singh and Dilpreet Singh are all in the team.

"This squad has been picked keeping in mind the performance in the previous tournaments since the Asia Cup 2017. We have tried out different combinations in the past events and we believe this will be the most effective combination for the Gold Coast 2018 XXI Commonwealth Games," said chief coach Sjoerd Marijne.

He further stated that the team has a winning mindset and will look to aim for the best in the quadrennial event.

"This team has been improving with every match and while we could not produce a podium finish at the 27th Sultan Azlan Shah Cup 2018, it will have no influence on how we are going to play in Australia and we will be going there with a mindset to win," said the 43-year-old Dutch Coach.

In the previous two outings at the Commonwealth Games, India has finished second behind Australia. Skipper Manpreet Singh, however, is confident of turning the tables this time.

"Our first aim is to do well in the group stage because we have some strong teams in our Pool. It's extremely crucial to top our table and make the semi-final but if we do meet Australia in the knockouts, I believe we will be up for a strong challenge," said the 25-year-old Manpreet.