Past CWG performances: Silver in 58 kg freestyle wrestling at the 2014 Comonwealth Games in Glasgow 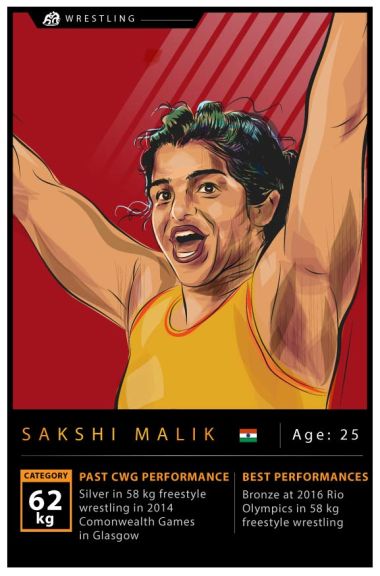 We are talking about another genuine medal prospect from India at the Commonwealth Games. We are talking about Sakshi Malik. The girl from Mokhra village in Haryana's Rohtak district, who ended India's long and frustrating wait for a medal at the 2016 Rio Olympics, with a bronze in the 58 kg freestyle category.

One would remember that all hopes of a medal at Rio was fast disappearing after nearly two weeks of dullness. Some of the Indian officials were adding to the flop show, doing nothing more than embarrassing the country with their actions. Things were looking utterly hopeless. The spectre of India returning from the Olympics with a zilch tally was looming large, and that would have been a massive come down from the highs of the two previous Olympics (the 2012 London Olympics, which saw India win as many as six medals – the biggest harvest from any Olympics – and the Beijing Olympics in 2008, which saw India getting its first individual gold medallist in Abhinav Bindra, apart from two bronze medals).

Then out of nowhere, Sakshi emerged as a 'saviour', giving the country a victory to savour, even before the euphoria that gripped the nation when PV Sindhu won silver in badminton. Sakshi's medal was sweeter because nobody had given her a chance and nobody expected her to win a medal, with the biggest medal prospects having already come a cropper in Rio.

With this stunning come-from-behind win, Sakshi became the first woman wrestler from India to win a medal in the Olympics and only the fourth Indian woman medallist at the Olympics, after weightlifter Karnam Malleshwari (2000, Sydney), boxer MC Mary Kom (2012, London) and shuttler Saina Nehwal (2012, London).

Sakshi got a chance in repechage after Valeriia Koblova of Russia, to whom she had lost in the quarter-finals, reached the title round. Sakshi was unstoppable in the repechage round, disposing off Purevdorjiin Orkhon of Mongolia 12-3. This ensured a chance to grapple for bronze in a play-off against Aisuluu Tynybekova. But Sakshi was soon trailing 0-5 and the result seemed all but decided. But Sakhi refused to be beaten and levelled the scores at 5-5 and won three more points in the dying moments to complete a dramatic victory and seal a bronze medal for her country. She later said that she knew a medal was assured for her if she fought till the end and hence did not lose hope when she trailed 0-5 at the break.

Sakshi's medal not only livened up the mood in the country, which had seen only failures in the first 11 days in Rio, it was a massive triumph for women empowerment, particularly in a state like Haryana, where girls do not always get a chance to express themselves. In fact, son preference in an intensely patriarchal society as the one to which Sakshi belongs, have made girls to be seen as 'burdens', which is fact explains the terribly skewed sex ratio (females per 1,000 males) in favour of the males. Sakshi's Olympic feat was a triumph over all those prejudices.

She beat Tayla Tuahine Ford of New Zealand in the 62 kg freestyle category to win gold at the Commonwealth Wrestling Championships in Johannesburg in December last year. However, her campaign in the World Wrestling Championship in 2017 ended with a whimper as she crashed out of the first round, losing to Luisa Niemesch of Germany.

Sakshi booked her berth for the 2018 Commonwealth Games by passing the selection trials at STC, Lucknow in December, 2017 and will be competing in the 62 kg category. At Gold Coast, Australia, the Olympic bronze medallist will be leading India's charge in wrestling in the women's section and she would want to translate reasonable success in 2017 to a major success this year.