Mumbai: Olympic bronze-medallist wrestler Sakshi Malik on Tuesday said her preparations for the upcoming Commonwealth Games and Asian Games are on the right track.

"On the 26th (of this month), I am going for the Asian Championships and after that there is Commonwealth Games, so the preparations continue. The thing is that after we perform well in (Asian Championships), the confidence level will grow and the hope (aim) is to bring a gold medal," Sakshi told PTI. 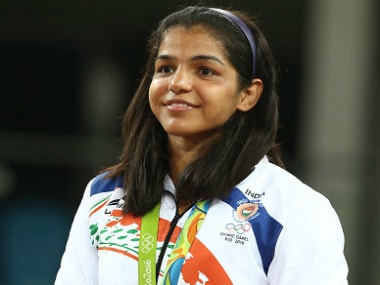 The Rio Olympic medallist, who was announced as a brand ambassador of tyre company Bridgestone, said she was aiming for a gold medal at both these multi-discipline Games.

"The Olympic medal gives me a lot of inspiration and my confidence has grown after that. After getting the medal, I am able to understand wrestling more," she added.

While the Commonwealth Games are scheduled to be held in Gold Coast in April, the Asian Games will be hosted by Jakarta in August.

Sakshi said that in the CWG she considers the Canadian and Nigerian wrestlers as tough opponents while the Japanese and Chinese will be difficult at Asiad.

"The preparations remain the same. But we see their videos," she said when asked how does she prepare to face Japanese wrestlers.

Sakshi also said she has benefited by taking part in the Pro Wrestling League as she could learn and train with renowned foreign athletes.