Kolkata: A new defensive technique added to her repertoire, Olympic bronze-medallist Sakshi Malik is confident that she would fetch her first Commonwealth Games gold medal when she takes the mat in Gold Coast next month.

The Rio bronze-winner has tweaked her leg defence on the insistence of her coach Kuldeep Singh Malik, something that has already got her a gold in the Commonwealth Championships in December last year. 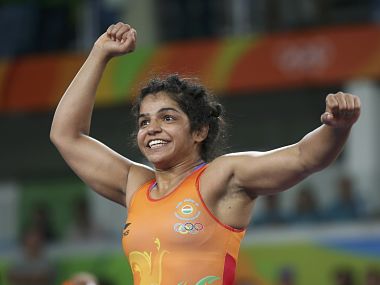 Speaking to PTI, Sakshi, however, refused to go into the details of the new technique that she has worked on.

"I can't give the details of the techniques. But as I said, I'm looking for a gold medal and more confident now."

In February this year, a controversial decision in the qualification bout against eventual silver-medallist Luo Xiaojuan of China cost Sakshi a place in the final of the Asian Championship in Bishkek, Kyrgyzstan.

"Life has changed completely (post-Rio). There's more responsibility on me now — to win more and more medals for India. I hope CWG is the beginning, ahead of the Asian Games in Indonesia later this year and Tokyo Olympics 2020."

"The target is to win a gold medal for the country in Australia. The preparations are going great and I'm giving my 100 percent, training twice a day," Sakshi told PTI from SAI Centre in Lucknow.

According to her coach Kuldeep Singh Malik, her leg defence has improved and that will help her hold and attack.

"It's a work in progress till we achieve 100 percent. It certainly makes a difference not only in defence but in the speed," the coach said.

Apart from training, Sakshi's preparations include watching videos of her possible opponents from Canada and Nigeria.

"Canada and Nigeria will be the strong opponents. I'm preparing myself by watching their videos, the techniques.," she said.

The wrestler, who competes for Mumbai Maharathi as captain in the Pro Wrestling League, said the experience has been very helpful.

"There's scope to learn something when we fight against or train with big names from foreign countries. I have improved a lot in my techniques and style due to PWL," the 25-year-old said.

Four years ago at the 2014 Commonwealth Games in Glasgow, Sakshi, who was competing at the women's 58kg then, failed to give any challenge to Aminat Adeniyi.

The Nigerian took a lead of 10-0 in two minutes 24 seconds when the match had to be stopped on grounds of technical superiority.

But after her historic Rio performance, Sakshi will head to Gold Coast as a strong medal hope.

"Everyone expects a gold from me. I will give my best and hope to upgrade my (last edition's) Commonwealth silver into a gold this time.

"The Olympic medal gives me a lot of inspiration and my confidence has grown after that. After getting the medal, I am able to understand wrestling more.