New Delhi: The excitement was palpable in his voice as reigning men's singles champion Parupalli Kashyap predicted the Indian badminton team's best-ever haul, including a medal in each event, at the upcoming Commonwealth Games.

His exploits helped India bring home four medals from the discipline at the Glasgow Games -- one gold, one silver and two bronze medals.

Since that day when he stood with the tri-colour draping him, Kashyap's life took a massive turn as multiple injuries, including a calf muscle tear and a knee surgery coupled with poor form, saw his ranking dip and he eventually missed the bus for the Gold Coast Games. 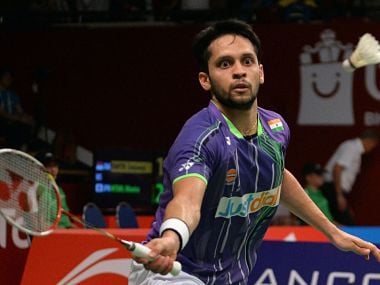 "I would have loved to play again but if I were the team selectors, I wouldn't put myself in the team because Prannoy and Srikanth have done exceptionally well," the former world number 6 told PTI.

"We have a good team and if we can play to our potential, best possible scenario we should win a medal in all five categories, so more than four medals for sure."

Top seed India have been drawn with minnows Pakistan, Scotland and Sri Lanka in Group A of the Games, which will be held from 4 to 15 April.

"We are top seeded this time and it would boil down to who we play in semifinals. England have decent men and mixed doubles and there is Rajiv Ouseph in singles, but I feel advantage is with India as HS Prannoy and K Srikanth can beat him even though Rajiv generally plays better in such situation.

"Chirag and Satwik are also playing well, so it would be crucial. I think it is 60-40 in India's favour," Kashyap said.

"Against Malaysia, it is a 40-60 situation for us even with Lee Chong Wei because in women's singles we are strong. Men's doubles and mixed doubles they are better on paper, so it would be difficult.

"Even if we unfortunately lose in semis we still should win bronze as there are no team strong enough to compete. Last time we lost to Singapore but then they had decent mixed and men's doubles. Me and Sindhu had won but we lost the doubles. So I feel we will win a medal for sure in team event," he explains.

Both Kashyap and RMV Gurusaidutt, who had won the bronze in 2014 CWG, couldn't make it to the team this time.

2010 champion Saina Nehwal, meanwhile, will return to compete in women's singles after an injury ruled her out of Glasgow.

Saina along with Olympic silver medallist PV Sindhu are hot favourites to win the women's singles gold this time and Kashyap feels ideally the duo should fight it out in the final.

"In women's singles, Saina and Sindhu should reach the finals. Canada's Michelle Li (CWG gold) is there she is doing well, so it would be doing that one match correctly. Malaysia are decent but they shouldn't be a threat for Saina and Sindhu.

"But in men's singles, Malaysia have just Lee Chong Wei and England have Rajiv, they have sent just one entry in singles. So all four should reach the semifinal any way."

Three-time Olympic silver medallist and former world number 1 Lee Chong Wei have won the gold twice in 2006 and 2010 edition. However, Prannoy had success against the Malaysia at Indonesia Open and Denmark Open last year. Besides, the Malaysian also crashed out of the Glasgow World Championship after losing in the opening round.

"Never count a senior player out. He has won gold in 2010 and 2006 and three silvers in Olympics. He knows he has to up his level. He will fight and be in a better position. So he will be really tough to beat," said Kashyap, who won the Austrian Open last month and reached the 2017 US Open final.

"People say he loses against Lin Dan but then it is always in the finals. So he has basically thrashed everybody else to reach the finals, he is boss when it comes to big events. It is a remarkable achievement, so he is the favourite."

The 31-year-old from Hyderabad believes it will be all about handling pressure and said the doubles pairs too have a good chance.

"In men's doubles, I expect Chirag and Satwik to reach the medal round, they are playing well but there is always pressure because there is a decent pair from Singapore and might be two pairs from England," he said.

"In mixed doubles, there is Chris and Gabby and two malaysian pairs, so it will be tough fight for Jerry and Sikki to get a medal but they have been playing well, they reached the semifinals of Japan and India Open. So they can win if fight hard.

"Ashwin and Sikki have a clear chance to win a medal. They are capable, they have beaten tougher opponents, there will be two Malaysian, an English and Singapore pair but I think they can win.