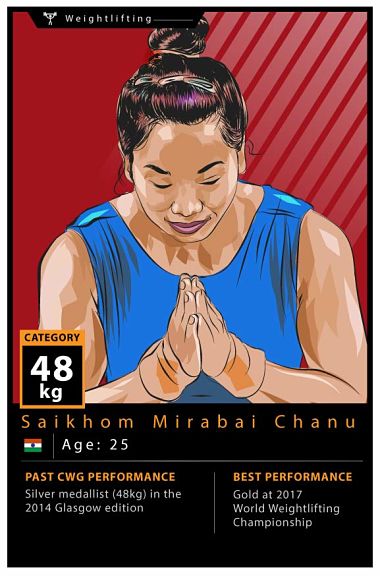 At the 2016 Rio Olympics, a lot was expected of the then 21-year-old Indian weightlifter from Manipur, Saikhom Mirabai Chanu.

She was riding high from the success of the Olympic selection trials in Patiala where Mirabai equalled the record of the legendary N Kunjarani Devi in clean and jerk.

However, when she stood on the grandest stage of them all, Mirabai underwent the ignominy of being one of the two lifters who did not finish the event. She picked up the weight just once out of her six attempts (three in snatch, three in clean and jerk).

Her world went for a toss and Mirabai almost decided to give up the sport and her dreams of emulating the feats of her role model, Karnam Malleswari.

But a timely change of heart, hours and hours of training under national coach Vijay Sharma and sheer determination, Mirabai managed a major turnaround of fortunes at the 2017 World Weightlifting Championship in the Anaheim Convention Center, California.

Mirabai became just the second Indian after her idol, Malleswari, to win gold at the premier event when she lifted a combined weight of 194kg — 85kg in snatch and 109 kg in clean and jerk— to pull off a feat that was last accomplished by an Indian in 1995.

The World Championship gold made Mirabai a name to reckon with in the field of weightlifting and added credence to the belief that she was a bright medal prospect for India in events like Commonwealth Games and Asian Games scheduled this year, and the 2020 Tokyo Olympics.

The gold at Anaheim was the result of a redemption journey that started with her winning the National Championship in Nagercoil in December 2016.

Mirabai believes that the next step in her career is to better the silver medal she won in the 2014 Commonwealth Games at Glasgow.

She said, "I will work harder and will look to improve upon the grey areas in my game. I will not make the same mistakes again. I will certainly improve and make sure that I win medals at future tournaments. I am looking to do well at 2018 Commonwealth Games and Asiad and then work even harder for the 2020 Tokyo Olympics."

While her exploits on the mat have been impressive, it is her clean image that gave a much-needed fillip to the sport that has more often than not been mired in doping controversies.

He said, "WADA tested her 15 times and NADA collected samples 30 times. It means in the last four years, there has been 45 tests in her and I congratulate her that all were negative. Earlier our image was bad due to dope cases but now our federation is dope free. Our aim was to make weightlifting dope free and our coaches and lifter made it possible."

Mirabai has never shied away from publicly expressing her respect and adulation for Olympic bronze medallist Malleswari. However, when the 23-year-old weightlifter walks out for the 48kg category weightlifting event in the 2018 Commonwealth Games, Gold Coast, Australia, she will be shouldering the hopes of a billion Indians on her strong shoulders.

From young athletes wanting to excel in the sport to professional athletes who hope to find a breakthrough, there are a number of people who now look at Mirabai for inspiration.

Mirabai is now being seen as a benchmark for success and a good showing at the Commonwealth and Asian Games will further cement her place in the annals of weightlifting history in golden letters.