"Pichli baar mai Glasgow me quarter-final me haar gayi thi par sir, is baar mai aapko medal zaroor laake doongi," (Last time, in Glasgow, I lost in the (women’s singles) quarter-final, but this time I will bring you a medal for sure) Manika Batra promised her personal coach Sandeep Gupta before leaving for Gold Coast. By the time the 2018 Commonwealth Games came to a close, Batra had bagged four medals, the most by any Indian, and created history not once, but twice.

Batra achieved what no other Indian woman could in the last 16 years —win a women's singles medal— that too in style with gold. Earlier in the 2018 Games, she led the women's team to a historic gold by ending Singapore's domination in the team event. Along the way of her successful 2018 Games, she beat World No 4 and the highest-seeded player, Feng Tianwei of Singapore, twice, won the women's doubles silver with Mouma Das and mixed doubles bronze with Sathiyan Gnanasekaran.

The eleven days from 4-15 April were a dream for Batra and her stellar performances at Gold Coast has captivated the sporting world. "The stunning performance she has given (at CWG) has no comparison," Gupta told Firstpost. Table tennis is more of a mental game than physical and Gupta began Batra's training with mental conditioning before the 22-year-old left for Gold Coast.

"I just motivated her saying we have nothing to lose. The game that you have learnt, utilise it in the best way without any fear," Gupta said.

"If you want to improve your performance, think only about the next point, don't think about the overall gameplan because it will get you under pressure."

Batra did play fearlessly throughout the Games and her overall strategy was based on the counter-attack. She was the pivot around which the Indian women's team revolved and her two singles games were crucial to India's chances in the team event. In the final, she had to go past Feng to give India a chance and this is where her unique mixed-rubber bat-twiddling technique yielded magic.

From 1-2 down, she clinched the match 3-2 to inject confidence into the team and after the pair of Mouma Das-Madhurika Patkar won the doubles rubber, Batra went on to win her next reverse-singles clash against Zhou Yihan, to seal the gold for India.

Batra uses long pimples on the backhand side which is a defensive setup that enables her to slow down the game and break an opponent's rhythm by imparting opposite spin. Then, by forcing the opponent close to the table, she suddenly goes on the counter-attack with the plain rubber giving the opponent very little time and space to react. This is a rare technique that was first employed by former Indian paddler and Olympian Neha Aggarwal under the guidance of Gupta. Batra developed her game watching Aggarwal and has been working on it over the last seven-eight years.

Perfecting this technique isn't easy. Judging the ball's speed, spin, and direction, analysing the overall input and providing a reply within a fraction of seconds takes a lot of processing.

While it's one thing to perfect a technique, executing it out on the court under pressure is a different thing altogether and Batra successfully did it to befuddle her opponents at the Games.

It wouldn’t come easy. Batra had to shut herself off from the outside world. Gupta, who also played the role of a father figure, made her turn off her phone at the Games to avoid distractions. However, he was constantly relaying his messages via team member Anthony Amalraj and Table Tennis Federation of India secretary MP Singh. Whenever she found herself trailing, or under a bit of pressure, the message from Delhi would reach her in a flash.

"I called up Amalraj and Singh and asked them to inform her to play freely. Play her natural game. Play the ball on the merit and not think about winning so that the pressure is off from her mind," Gupta recalled.

Beyond just the motivational talk, there was tactical input provided by both on-court India coach Massimo Costantini and Gupta from Delhi. Both the coaches asked Batra to keep varying her strokes, their placements and to be unpredictable with her gameplan.

"Lately, Manika has learned lots more skills related to her rubbers and the numerous combinations. Her biggest strength was to have the ability to apply them in the match by creating more and more variations," Constantini told Firstpost. "I used to advice Manika: “Don’t give your opponent any clue on what you are going to play”, and she was comfortable on this because it clicked.” Before Batra's women's singles final against Singapore’s Mengyu Yu, Gupta had a good half-hour talk with his pupil focussing on two key aspects — motivational and tactical. Gupta wanted to remove the pressure of the gold medal from her mind.

"You have achieved a level and there is nothing to lose," Gupta encouraged Batra. "I don't want anything more, what you have achieved is more than enough now go out and express yourself. Play with passion and be relaxed."

Batra was riding high on confidence after making it a double over Feng earlier in the day in the semi-final of the women’s singles. However, there were some crucial technical adjustments to be made against Feng's compatriot Mengyu in the final.

Table tennis is a skill-heavy game and there is a lot of analysis that goes into dissecting and decoding an opponent's technique and skills and finding a way to counter the same. There is no doubt the Singapore contingent must have spent ample time decoding Batra's gameplay, especially her mystery technique. In the semis, Feng was trying to make her play the forehand down the line, which was working for the Singaporean. In the final, Gupta then advised Batra to hit more cross-court forehands and switch over the game to remove the predictability factor. However, all seven games wouldn't have the same gameplan.

"We have to play 60 percent on forehand, 20 percent middle and 20 percent backhand which will make the player stay confused throughout," Gupta advised Batra. "Now we will make her (Mengyu) play extreme forehand while receiving because in the semis you made her (Feng) play the extreme backhand while returning."

Batra was not just processing these inputs but also executing them to perfection.

"Her brain is like a slate. Whatever the coach writes on it, she executes it in that exact manner," Gupta says. "I have given the country 200 odd state and national players but she is unique. Her mental strength is pretty good. So I told her whatever message Amalraj and Singh send through from balcony, follow those blindly and honestly. I will be continuously in touch with them."

Batra followed those instructions and completely outclassed Mengyu in straight games in the women's singles final to become just the second paddler from India after Sharath Kamal to win a singles medal at CWG. The improvement in her forehand was a strong catalyst for her success.

In the big matches, every time Batra was put under pressure, her response was fascinating. In the women's team final she was 1-2 down against three-time Olympic medallist Feng but she bounced back to win it 3-2. In the women's singles semi-final, against the same opponent, she was 2-3 down but turned it around to win 4-3. In fact, this time she fought back from 4-8 down in the final game to clinch it 13-11. Against Mengyu, she started off on the back foot 1-6 down but at 2-7, she went rampant to win nine consecutive points to set the tone for the gold medal win.

"I have never played better. In the first game I was down 1-6. I said to myself I can recover and win and I did," Batra said after the women's singles gold medal match. 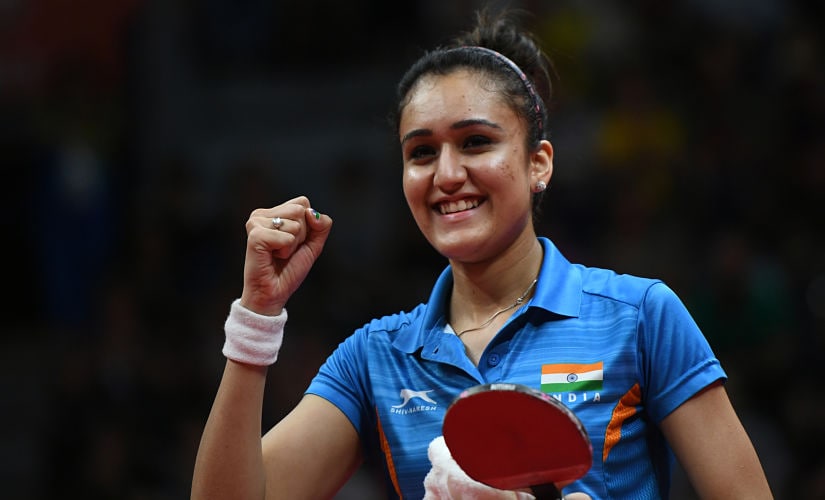 In the big matches, every time Manika Batra was put under pressure, the 22-year-old's response was fascinating. AFP

Apart from the unique style of play and execution skills, Batra's self-belief played a big role in her success.

"What set her apart was that an Indian woman was showing that belief," Aggarwal explains. "It is something which is to be stressed upon because Indian women never went on the court against a team like Singapore (with the mindset) to win it and thrash them and all of that.

"Somewhere deep down inside we knew that this (Singapore) is an invincible team we are playing against, (a team) like China. It was always like, 'theek hai final pahunchna hai silver jeetna hai'(It's okay we need to enter the final and win silver). Gold was never talked about. Manika, the way she played the semi-final was world-level play. It was all in her mind. It was the belief.

"She is very smart and used it. The other big thing is that she took the pressure very well. There was so much at stake over there. Just imagine being inside that stadium, playing for India, you are about to create history and you know that. So in that situation, a 22-year-old might just falter. But she did just better and better. That is something I have not seen other Indian girls doing. Today, her belief, her confidence and the very fact that she took the pressure means that mentally she was very strong and determined. She works a lot on it. She lays a lot of emphasis on that aspect of her game," said Aggarwal.

It's been 17-18 years of hard work that she has put through, along with her support system, ever since she took up the sport at the age of four. The steady progress has culminated in success at the 2018 Commonwealth Games and has made her the most successful Indian woman paddler ever.

"Manika is so humble and yet very determined," Costantini says. "She knows her potential and now she is very much ready to achieve new heights. She is young and I think she is on the right track to aspire something exceptional."

Beneath that calm demeanour and a charming smile lies a spirited mind and in Gold Coast, Manika Batra instilled the belief in the nation's girls that 'If Manika can, even I can!'