MC Mary Kom’s delightful smile on being confirmed as winner of the women’s boxing 48kg gold in the Commonwealth Games in Gold Coast and her Northern Ireland rival Kristina O’Hara’s warm hug for the much older and well-decorated champion added to the array of images that are embedded in the recesses of every fan of hers on Saturday.

Similarly, Neeraj Chopra’s winning effort over 86.47m to win javelin throw gold will be etched in countless young minds, too. The 20-year-old had already found his way into public consciousness by winning the World U-20 title in Poland in 2016 with a junior world record to boost. Yet, watching Chopra, his headband keeping his hair obediently in place, was special.

India also watched two badminton players who have become household names in the past few years. Saina Nehwal and PV Sindhu set up a meeting in the women’s singles final with victories in the last four stage on Saturday, reinforcing the galleries of images in the mindspace of their fans across the country.

Of course, 37-year-old shooter Sanjeev Rajput shone with Games records in the men’s 50m rifle 3 positions both in the qualification stage and in the final. For long, the former Navy officer has been in and out of the shadows of Abhinav Bindra and Gagan Narang but by holding his nerves over the last shot today he found his moment under the sun.

A walk-over in his final 125 kg wrestling bout denied Sumit Malik the chance to experience the gold medal winning moment but boxer Gaurav Solanki’s delight when he won a split verdict was worthy of being framed. Vikas Krishan Yadav made no attempt either to conceal his joy on making his Commonwealth Games debut a golden one.

And, Vinesh Phogat’s bout that gave her fans the chance to erase memories of her being carried away on a stretcher from the quarter-finals in Olympic Games. With the help of her medal, India added a 5th wrestling gold, and in process matching the country's tally at the Glasgow Games in 2014. 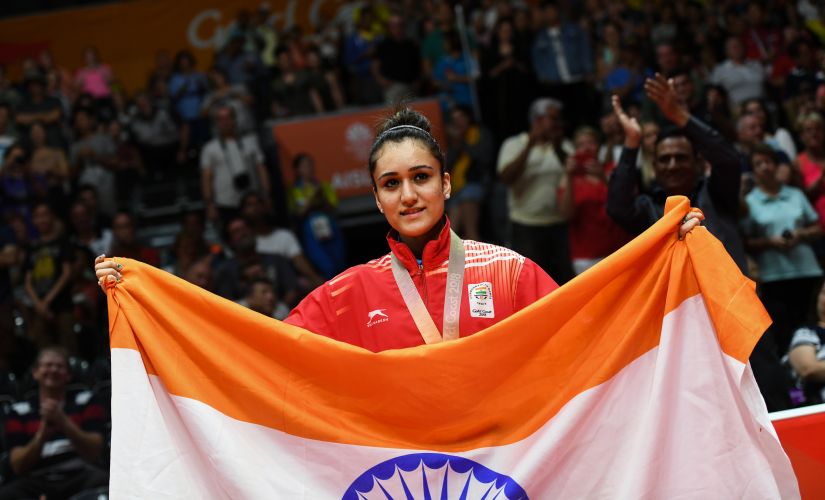 Manika Batra's gold medal in table tennis women's singles was the highlight of the day for India. AFP

Yet, it was table tennis player Manika Batra, 22, throwing her arms up in the air and jumping with joy at having won the women’s singles gold that gave India the strongest memory on Saturday. It was not only because her match was held late on Saturday afternoon (IST) but because she made a telling impact on impressionable minds.

Manika Batra’s achieved a massive feat, considering that New Zealand’s Chunlli Li, gold winner when the sport made its debut on the Commonwealth Games programme in 2002, stands out as the only non-Singaporean on the list of medallists in the event. To have made a serious dent in such a stronghold is incredible, indeed.

Packing a smart mind and executing well thought out plans, the Delhi-based player ensured that Singapore’s Mengyu Yu would end up being a silver-medallist for the third Commonwealth Games in-a-row with a 11-7, 11-6, 11-2, 11-7 victory in half an hour to set off celebrations across thousands of miles away.

Then again, the nature of sport is such that it is not always possible to remain on top of one’s game as was shown in Sakshi Malik’s two defeats in the 60kg class. Similarly, the men and women’s hockey teams will remain work in progress and have some distance to cover before they can challenge the world’s top teams consistently.

Indians may not have got to watch HS Prannoy’s 16-21, 21-9, 14-21 semi-final loss to badminton legend Lee Chong Wei (Malaysia) but could empathise with his pain and disappointment. But they did get to experience an emotional roller-coaster while Ashwini Ponappa figured in mixed and women’s doubles defeats in the semi-final and won a bronze medal along with Sikki Reddy.

On the final day of the Games, squash heroes Dipika Pallikal Karthik and Joshna Chinappa will battle to keep the women’s doubles squad gold they won in Glasgow in 2014. Dipika had to endure the disappointment of not winning the mixed doubles gold in partnership but in joining Saurav Ghoshal on the podium, she helped him overcome the pain of an early exit in singles.

Indians are in line for three gold medals on the badminton courts in the Carrara Spots Arena. Kidambi Srikanth has the rare chance to beat legend Lee Chong Wei for the second time in a week to win the men’s singles crown while Satwik Rankireddy and Chirag Shetty will have to defeat the English pairing of Marcus Ellis and Chris Langridge.

Yet, the Saina vs Sindhu battle in the women’s final will draw more eyeballs, given that theirs has always been a mouth-watering clash. Saina, who won their last meeting in straight games in the Indonesia Masters in January, has played eight matches in 10 days while Sindhu may be relatively fresh, not having played during the team’s march to gold.

Playing as they do in the era of television, these women badminton players, including Jwala Gutta and Ashwini Ponappa, have made a difference to the following for the sport in the country. Their stories, including the sacrifices made by their parents and the toil of their coaches, inspired little girls across the nation.