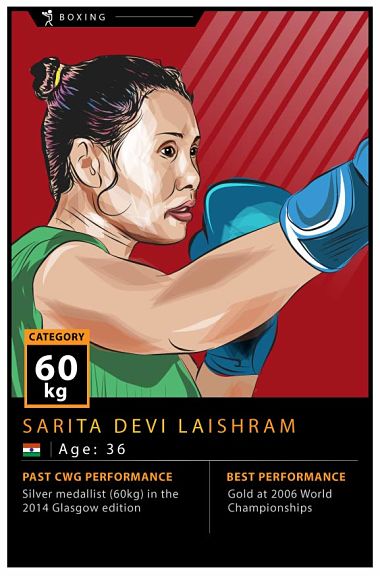 When you think of a boxer, one of the first images that comes to mind is the upstretched hand of the winning pugilist after the last bell has rung and the judges have come to a conclusion.

However, in the case of Sarita Devi Laishram, it will be the heart-breaking image of the then 32-year-old refusing to accept the bronze medal awarded to her at 2014 Asian Games. Sarita, who believed she was the deserved winner of the semi-final bout against South Korea's Park Jina, teared up during the medal ceremony and decided against accepting the bronze that was awarded.

After an apology, a one-year ban and a sojourn in the professional boxing league, the 2006 World Championships gold medal winner has had a rewarding career since the 2014 Asian Games saga.

In 2016, though her dream of qualifying for the Olympics remained unfulfilled, Sarita kicked off her comeback trail with a gold at the South Asian Games.

Since the start of this year, Sarita has been plying her wares in the 60 kg lightweight division and has made impressive returns. Kick-starting this year with a silver medal at the India Open in January, she followed it up with a bronze at the Strandja Memorial Boxing Tournament in February.

Away from the boxing ring, Sarita has also taken up administrative duties as a player representative in the executive council of the Boxing Federation of India(BFI), where she aims to raise problems faced by women boxers in the country.

On 4 April, Sarita will face her first big challenge when she dons her gloves for the Commonwealth Games at Gold Coast, Australia. In her previous CWG appearance at Glasgow (2014), Sarita faltered in the final step and won silver.

However, with the revamped BFI and its recognition from the International Olympic Association, a lot is expected from Indian pugilists at the 2018 CWG Games. One of the most favoured medal prospects, Sarita is pumped up about her chances at the Gold Coast event.

Talking about her medal chances, Sarita said, "Our preparation’s going quite well. We have a good preparation because we are receiving support in every form. They (BFI) hired a foreign coach, trainer for us. From our side, we are giving our 100 percent in our preparation for the Commonwealth Games. Last time I got a silver, and this time I have to win gold."

While the 2014 Games saw her struggle past a niggling wrist injury, there seems to be no such hassles this time around for her and she will hope to leave a contrasting lasting image in people's minds when she fulfills her aim to change the colour of her Commonwealth Games medal into a bright, shiny yellow.