Commonwealth Games 2018: Kidambi Srikanth would look to overcome poor start to the year with a medal in Gold Coast 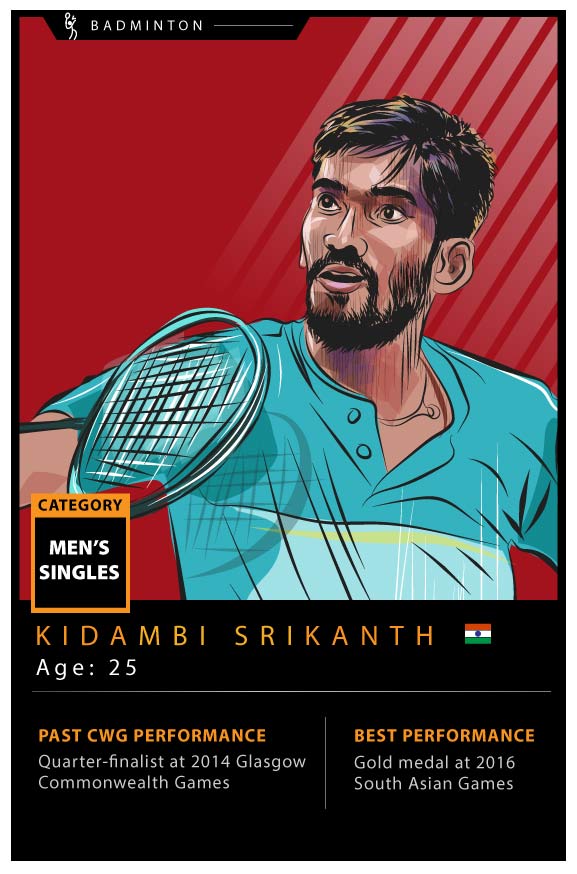 When Kidambi Srikanth breezed past Japan's Kenta Nishimoto to clinch the French Open in October 2017, he became the first Indian and only the fourth male shuttler in history — joining the elite list of Lee Chong Wei, Lin Dan and Chen Long — to lift four Super Series titles in a calendar year.

The French Open title was preceded by triumphs in the Australian Super Series, Denmark Open and Indonesia Super Series.

The year 2017 was the most successful in Srikanth's career. But soon after the success in French Open, he pulled out of China Open and Hong Kong Open to give his body extra time to recover from injury and arrive at the Commonwealth Games in Gold Coast in perfect condition.

"For me, winning a medal at the Commonwealth and Asian Games is more important. If I wanted to be World No 1 and not win tournaments (CWG or Asiad), I would have pushed myself to play China and Hong Kong Open last year after the French Open," said Srikanth, who is currently the World No 2.

However, Srikanth wasn't completely away from the sport in the last few months. His last competition in 2017 was the Dubai World Superseries finals, where he failed to reach the knockout stages.

If compared to the highs of 2017, the year 2018 has begun on a relatively poor note for Srikanth. Along with PV Sindhu, he was India's medal contender in the All England Open. But Huang Yuxiang beat the Indian 11-21, 21-15, 20-22 in a closely-contested match in round of 16 clash.

But despite the poor start to the year, Srikanth will go into the Commonwealth Games as a strong medal contender. And he seems quite confident about that.

"Though China doesn't compete in the event, there is good competition from the Indian players themselves who have been doing exceptionally well. However, if I am playing my best in every match, I have a chance of winning the gold," Srikanth was quoted as saying to Firstpost in February.

Srikanth did impress at the Asia Team Championships, but putting up a good performance at Gold Coast will prove that year 2017 was not a flash in the pan.