New Delhi: The Athletics Federation of India (AFI) on Saturday named a 31-member Indian track and field team (18 men and 13 women) for the upcoming Commonwealth Games in Gold Coast.

Junior World Champion javelin thrower Neeraj Chopra is set to make his debut at the CWG. Neeraj recently won gold at the Federation Cup with an effort of 85.94m, which is the second best effort of his career.

India has been offered a quota of 37 in athletics but the AFI selection committee, which met after the conclusion of the 5-8 March Federation Cup National Championships in Patiala, chose only 31. 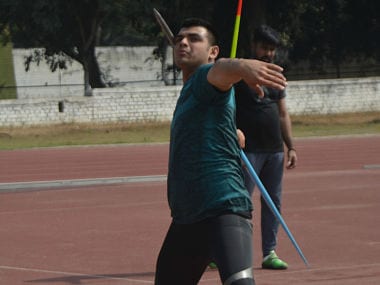 Punia, who will be taking part in her fourth CWG, had won a silver in the last edition in Glasgow while Arpinder had clinched a bronze. The lone gold winner in Glasgow, discus thrower Vikas Gowda is not taking part this time.

The team also has the men's and women's 4x400m relay teams as both the events have been India's stronghold. The men's relay team comprise six members while the women's team has five as Karnataka quartermiler Vijayakunari GK, who won the silver in the Federation Cup behind Hima Das, was not agreeable to AFI's offer to include him on the condition of joining national camp.

The composition of the team was on expected lines except for one or two and all the 10 athletes, who crossed the qualifying mark during the Federation Cup got selected while three who did well during the first leg of the Indian Grand Prix on February 27 at Patiala, also made the cut.

"The selection of the team was a smooth affair and all the decisions were unanimous among the members. We have chosen all those who have crossed the AFI's qualifying standards and some more who got close to the mark," chairman of selection committee GS Randhawa told PTI.

"We decided that we need not fill up all the quota of 37 because we cannot send the athletes who were much below the qualifying standards. There is no point sending an athlete who have a remote chance of a medal," he added.

Discus thrower Navjeet Kaur Dhillon and javelin thrower Vipin Kasana were the two athletes, who were picked on the basis of their performance at the Indian Grand Prix.

Dhillon crossed the 59m qualifying mark with a best throw of 59.18m at the Indian GP though she was below par at the Federation Cup with an effort of 57.75m, which fetched her a silver behind Seema Punia.

"The Federation Cup served as a selection trial for the CWG but we have always maintained that the performance of the athletes at the Grand Prix will also be considered for selection," AFI Secretary CK Valson said.

Kasana cleared 80.04m at the Indian Grand Prix and since his mark was was near to the qualifying mark of 81.80m, he was included in the CWG team.

He, however, did not take part in the Federation Cup, which may lead to the raised eyebrows from some quarters.

Asked about Kasana being picked despite skipping the Federation Cup, Randhawa said:"The selection committee members were told that Kasana's coach and the team doctor advised him rest. That was why he did not take part in the Fed Cup. Since he crossed 80m at the IGP, we considered that he can be at the top bracket in the competition."

The third athlete who was picked on the basis of his Indian Grand Prix performance was triple jumper Rakesh Babu Arayan although he finished fourth with an effort of 16.31m while the qualifying mark was 16.60m. Babu, however, had won the Indian Grand Prix with a jump of 16.59m.

Valson also said that senior quartermilers Mohd Anas and MR Poovamma have agreed to join the national camp from now on and that was why they were included in the men's and women's 4x400m relay teams. They were earlier training outside the national camp.

"Poovamma and Mohd Anas have agreed to join the national camp and do training for the relays. Vijayakunari did not agree to it and so she was not selected. That was why we have selected just a five member realy team (including Hima Das who will run individual 400m race)," Valson said.