New Delhi: Indian Olympic Association (IOA) on Thursday said that Sports Minister Rajyavardhan Singh Rathore has assured it to have a re-look at government's policy of not clearing 'extra officials' for the upcoming Commonwealth Games in Gold Coast.

This assurance comes after the IOA President Narinder Batra slammed the ministry for raising "unnecessary issues" about the Commonwealth Games contingent, asking it to apply the same standards of probity for its own bureaucrats. 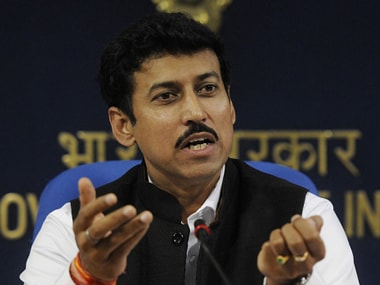 The new development could mean that all the 21 'extra officials' named in the list of Indian contingent circulated today could be cleared by the ministry to go to Gold Coast at no cost to the government. These extra officials will go at the expense of the respective National Sports Federations, according to Batra.

This could also ensure that the parents of star shuttlers PV Sindhu and Saina Nehwal accompany them in the CWG. The names of Sindhu's mother Vijaya Pursala and Saina's father Harvir Singh were there in the list circulated by the IOA today.

Batra had a telephonic conversation with Rathore, who is currently in Bangalore on an official visit, after the send-off ceremony of the CWG contingent.

"Further to the send-off function of the Indian CWG contingent held today on 22.03.2018, I have had a telephonic discussion with Mr Rajyavardhan Singh Rathore, Hon'ble Union Minister for Youth Affairs and Sports (Independent Charge) regarding the required extra officials travelling with the Indian Contingent," Batra said.

"As per CWG protocols only 33% officials are permitted in ratio to participating athletes. For the present CWG, we have 222 Athletes participating, hence the permitted officials with the contingent will be 74. The required officials beyond the number of 74 going with participating teams as part of the Indian contingent have been requested by me to be cleared at no cost to the Government," he said.

"I am personally thankful to the Hon'ble Minister for his assurance to review and relook at clearing of required extra officials at no cost to the government," Batra added.

Earlier in the day during the send-off ceremony, Batra had vented his displeasure after it learnt that the ministry has decided to put a stop to officials "fun rides" and stick to the rule of keeping the size of officials' contingent to one-third of the athletes' count, except in special cases.

"I don't know why the sports ministry is raising these unnecessary issues. We called these as extra officials but in fact these are not extra officials. These days in every sport you don't need only the coaches but you need managers, doctors, physios and masseurs. They contribute to the good performance of the players," said Batra at the media conference after the send-off ceremony.

The IOA had sent the ministry a list of 222 athletes, 74 support staff and 21 extra officials, who Batra claimed, will accompany the contingent at the expense of their respective National Sports Federations.

Besides, the IOA had sent a list of 11 overall contingent staff, including the Chef-de-Mission, three General Managers, two doctors and two physiotherapists. Batra was critical of the ministry for striking down the chief medical officer and one physiotherapist as proposed by the IOA.

The ministry is yet to clear the final Indian contingent sent by the IOA and it is expected to take another couple of days.