Mumbai: Pointing to the lack of success against England in past Commonwealth Games, India's most experienced paddler and eight-time national champion, Achanta Sharath Kamal, is hoping to break the jinx next month and cull the coveted gold medal in Gold Coast, Australia.

"I would be disappointed if we don't get the men's team gold. We are a fantastic side and are doing very well. We are pretty confident. At the moment England are No 1 and we are No 2.

"We have not beaten England even once in CWG although we had beaten them in World Championships. Hopefully, we will break the jinx," said Sharath in Mumbai on Wednesday ahead of his departure to Australia for the Games with other Indian table tennis team members.

"Then there is men's doubles; me and (Gnanasekaran) Sathiyan have been doing very well. Then in singles Sathiyan will be No 2 and I probably will be No 4. 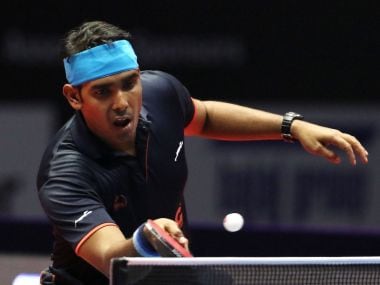 "We should be making it to the semis. The probability is very high and we will be very happy if we could equal the 2010 medal tally," said the 35-year-old triple CWG gold medal winner.

"We stand a chance in all categories - men's singles, doubles and mixed doubles. I don't know about women's singles, not my forte," added Sharath who won the individual and team gold medal in the 2006 Melbourne CWG and won a gold in men's doubles in 2010 at Delhi.

India had won five medals in table tennis - comprising one gold, one silver and the rest bronze - in the Delhi Games.

Sharath said the Indian men's rankings were an indication of their growing stature in world table tennis, adding there was a big bunch of players to bank upon, so much so that the absence of a top player like Soumyajit Ghosh, will not make a dent.

"If you look at the rankings from January, we are doing pretty well on the international circuit. Everybody is talking about India's growth; even the Chinese have come up to us and said - India is doing well.

"Earlier, we used to have only one or two (at the top), now there is a huge bunch of players. World players are taking note and they know us by name," he said.

"The good part is six of us have been training together. We always had one extra person to take care of injury (to one person). We have a good team. Of course, (Soumyajit) Ghosh is not there (suspended by TTFI due to a police complaint against him)," the paddler said.

"But we have moved ahead. Guys like (Anthony) Amalraj and Harmeet Desai - they are also good and very experienced. Only Sathiyan has his first Games. The dent (absence of Ghosh) is not that big at all," he insisted.

Sharath said performance of the Indian squad in the CWG and the subsequent Asian Games in Indonesia was crucial to get government funding back for the game.

Sathiyan, the highest-ranked Indian in the singles draw in the Gold Coast Games, said he intended to put his best foot forward and climb the medal podium.

"It's the first Commonwealth Games for me. I am going into it not for just participation but with an aim to do well," Sathiyan said.

"We have a good team. Singapore, Australia and England have good teams. I think we are ranked four. There should be a medal (for India)," she said.