It was an all-win day for the Indian shuttlers as everyone stormed into the last-eight stage in their respective events. Sindhu, who has recovered from an ankle injury, was stretched a bit by her Australian opponent Hsuan-Yu Wendy Chen in the first game before clinching the match 21-15, 21-9 in a 34-minute round of 16 women's singles match.

The Rio Olympics silver medallist did not play in the mixed team event which was won by India. 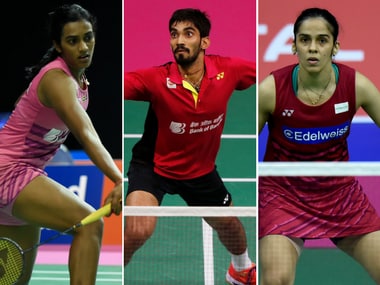 PV Sindhu, Kidambi Srikanth and Saina Nehwal are in the quarters. AFP

"She (Chen) is a junior player, so she's doing really well. I didn't take it easy because you never know anything can happen at any moment. I just played my game and finished it off," Sindhu said after her match.

Asked about the possibility of two all-Indian finals in the men's and women's singles, Sindhu said, "I think definitely yes. We are going to see ourselves in the finals both sides. It would definitely be a good thing."

Nehwal, the 2012 Olympics medallist, did not have to sweat at all as her opponent Jessica Li of Isle of Man retired hurt in the second game after the Indian had won the first 21-4. Nehwal was leading 2-0 in the second game when Li decided to retire.

Li injured her right ankle at the end of the first set which forced her to concede the match.

"The last point was really tricky because I didn't know (what had happened to her). Yes, she fell, but I didn't know if it was bad, ankles are delicate. It will definitely be a tough injury for her. It's the Commonwealth Games and we all wish to play. But, a match is a match. She tried her best," Nehwal said.

In men's singles, Srikanth celebrated his Numero Uno status with an easy 21-10, 21-10 win over Niluka Karunaratne of Sri Lanka in just 33 minutes in his singles round of 16 match.

HS Prannoy also joined Srikanth in the quarter-finals with a comfortable 21-18, 21-11 victory over Anthony Joe of the host country.

In mixed doubles, the pair of Satwik Rankireddy and Ashwini Ponnappa beat Kristen Tsai and Nyl Yakura of Canada 21-10, 21-7 to sail into the quarter-finals while Pranaav Chopra and N Sikki Reddy also did the same with a 21-19, 21-13 win over Danny Bawa Chrisnanta/Jia Ying Wong of Singapore.

In men's doubles, the Indian pair of Satwik Rankireddy and Chirag Shetty beat the Mauritius duo of Aatish Lubah and Christopher Jean Paul 21-8, 21-12.