Chennai: Anthony Amalraj jumped into table tennis fraternity's collective consciousness when he leaped onto the TT board after beating Achanta Sharath Kamal at the Senior National final in 2012, something that didn't amuse the mandarins running the game in the country.

However Amalraj's career is more than a fleeting moment of animated celebration as he has silver medal in men's doubles and team event at the Glasgow edition in 2014. In the New Delhi edition in 2010, Amalraj won a bronze in the mixed doubles event.

The Chennai paddler feels that it's about time that he changes colour of the medal to gold during the upcoming edition in Gold Coast. Amalraj is a part of the country's squad for the upcoming Games alongside Sharath Kamal, G Sathiyan, Harmeet Desai and Sanil Shetty. 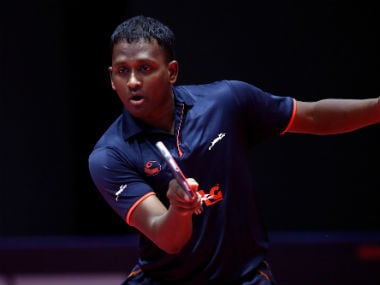 Ahead of the Commonwealth Games which begins in Gold Coast, Australia, in less than two weeks, the 32-year old is confident of another good show and said India with six players in the top 100 of the ITTF rankings, is confident of winning the yellow metal.

"We have prepared well and have a really strong team now. We have six players in the top 100. I feel we have a chance to win gold in the team event," Amalraj told PTI during an interaction.

The country's paddlers had a training camp in Europe, apart from playing in Pro-Tour events in various places. Amalraj said this had helped them prepare well for the CWG.

"We trained in Portugal, which helped us prepare well for the CWG. Also, we played tournaments in the lead-up. I also won a medal in the doubles event at the Polish Open," he said.

"At the Qatar Open, I won against the World No 50. Training and playing with top players has actually improved my game. I am confident this form will continue into the Commonwealth Games," he added.

He, however, felt the challenge for India will come from England and Nigeria and said the training camp in Portugal would come in handy.

"I feel England and Nigeria will the teams to watch out for. But we have trained well for the event and that should help," he added.

Amalraj, who considers speed to be his forte, said he had improved in the last two years and he had been playing well at the international level, apart from working on the fitness and mental aspect.

"In the last two years, I have been playing well at the international level. Importantly, I worked on my mental strength and fitness. Also, by gaining experience I have begun to do well," the World No 93 added.

Amalraj is of the opinion that franchise-based leagues like UTT (Ultimate Table Tennis) launched last year will enable Indian paddlers improve as it helps them learn from top players from across the world and boosts their confidence.

"Leagues like UTT, which goes on for three weeks, can help Indians because we get to spend time with top players of the world and train with them. We get to interact with them and it is good for our confidence," he added.