Commonwealth Games 2018: Indian men's TT team thrived under pressure to live up to expectations and bring back gold

For the second night in a row, an Indian paddler stood in the middle of the Oxenfort Studios arena in Gold Coast with his arms afloat in celebration. Sathiyan Gnanasekaran dropped his racquet and embraced a stunned Harmeet Desai, his doubles partner after clinching the final point of the men's team table tennis gold medal match. Captain Sharath Kamal, who had now added a fourth gold to his gilded cabinet, charged onto the court to swamp the doubles pair as the entire team erupted into a huddle dance. The joy was visible. 12 years after they won the first team gold, they had brought it back home with a dominating 3-0 win against Nigeria.

The sense of satisfaction was palpable, especially because there were a lot of expectations riding on the team.

"India is the favourite country in the Commonwealth Games (this time), whereas in 2010 the team to beat was Singapore," coach Massimo Costantini had told Firstpost before the Games. In 2006, India went in as the underdogs and won the gold. This time they were the favourites and hence under a different kind of pressure. The Indian table tennis has undergone significant improvement in the last few years. Nine players (six men and three women) have entered the top-100 in the world, something which has never happened before. India had fielded one of the strongest teams in the 2018 Commonwealth Games and were the top seeds. Also, the disappointment of 2010 Delhi Games where they had managed just one medal - A silver in Men's doubles, was lingering. So the pressure of expectations was more.

"Yes, there was a lot of pressure because the last edition was not good," Sathiyan told Firstpost. "We were ranked very high and being the top seeds it's (pressure) always there."

India cruised through the group stage with straight-set wins over Trinidad & Tobago and Northern Ireland respectively. They also brushed aside Malaysia 3-0 in the quarterfinal. Yes, the draw favoured them but they still had to finish games.

The first real test came against defending champions Singapore, who were not as formidable as they used to be. Still, the presence of the experienced three-time CWG gold medallist Gao Ning in their ranks made them a competitive side. The semis went down the wire and at 2-2, this is the first time India were put under pressure. Sharath, as always, stepped up and held his nerve in the reverse singles rubber to propel India into the final with a 3-2 win.

England, the second seeds at the Games and 2018 ITTF Team World Cup semi-finalists, were expected to be India's opponents in the final but Nigeria stunned them in semis. The fact that Nigeria did it without their star and highest ranked player in the Games — Aruna Quadri — who was unwell, made it even more special. 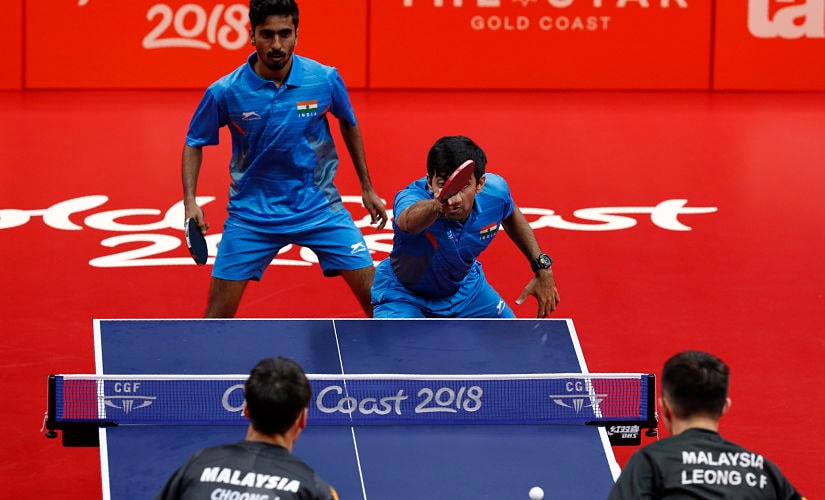 While Aruna's absence gave India the edge, the win over England along with Singapore women's team shock defeat at the hand of Indian women paddlers, put India on a high alert.

"After Nigeria beat England without Aruna, we got extra concerned. We said if Nigeria have beaten England without Aruna they can also beat India, so we entered the match with extra focus because we did not want to fall in the arena trap," India coach Massimo Costantini told Firstpost.

Against Nigeria, India changed their strategy from the semis, which had taken place on the same day few hours ago. Sharath, was sent in to play the first rubber, in order to gain a positive start. Against Singapore, Harmeet had started off. India were also mentally ready for long rallies, one of the biggest strengths of a strong an fit Nigerian side.

Sharath started off scratchily to lose the first game 11-4 to Bode Abiodun, the hero of Nigeria's win against England. However, the 35-year-old responded to the early pressure with change in strategy which saw him serve more to Abiodun's backhand and taking a more aggressive approach. It clicked, and he cruised through the next three games to give India a 1-0 lead.

Sathiyan lost the first game against Nigeria's most experienced player — Segun Toriola — squandering four match points because of  "slight mental slip." He had lost his singles rubber against Singapore earlier in the day. It could have piled up pressure on a 25-year-old, especially in his debut Games on the big stage. However, Sathiyan remained unfazed. He hit the refresh button and just like Sharath in the first rubber, outclassed Toriola with his speed and reflexes in the next three games.

"I was phenomenal today, moving very well, and playing very well, handling pressure because it was first big games for me playing at the big stage," Sathiyan said. "I could feel that getting inside me. But playing lot of tournaments and Pro Tours abroad really helped me to handle this kind of atmosphere and this kind of pressure and I am really happy I could deliver at the right time."

At 2-0, India had developed a firm grip on the game. It was all about delivering the killer blow, and  the Sathiyan-Harmeet pair did just that. With ultra-aggressive play,  they delivered the knock-out punch on the Olajide Omotayo-Bode Abiodun pair that had won it's doubles rubber earlier against England.

Along with Sharath and Sathiyan, Harmeet too had played a crucial role throughout. The Sathiyan-Harmeet pair remained unbeaten. Harmeet spent a sleepless night but on the court, he was wide awake.

"There was so much pressure that I couldn't sleep last night (before the semis). I hadn't felt this kind of pressure ever, this was the biggest event for me where I was playing for a medal," Harmeet said. "In the last Games, we had missed out on the medal by one point so I was very much determined to bring it home. Every time I tried to sleep I just couldn't, I was very tense and I think even the entire team was tensed," Harmeet recalled.

"It's wonderful playing with Harmeet because he is so aggressive," Sathiyan said. "We have known each other for so long, from junior days and I know what he feels and wants and we were very open to sharing (our views). If I feel something I tell him openly and he immediately responds to it. It was that kind of chemistry between us and it worked out really well, we were able to take win crucial points with those calculated risks and make the right moves. We both are close to the table players but were able to adapt each other's technique and style of play." 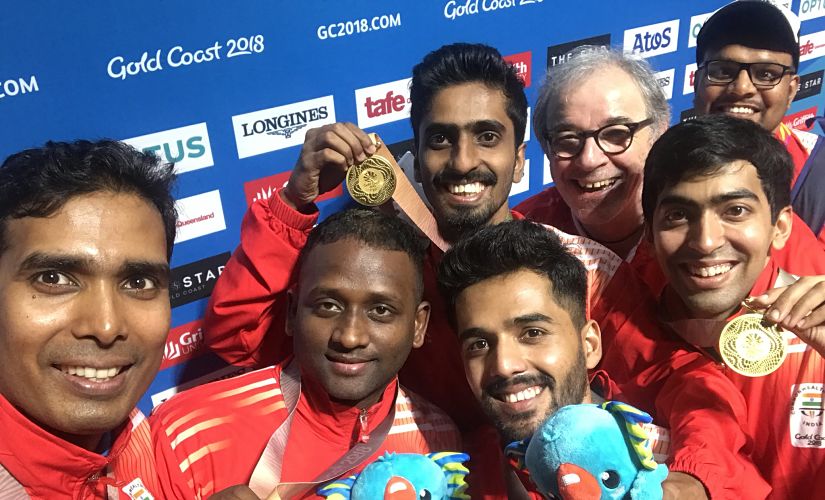 Over the last few years, Under the guidance of 'big brother' Sharath, the Indian team has gelled really well. One of the reasons for their rise has been strong bonding within this vibrant group. Something which again played its part in Gold Coast.

"The team spirit was the key. We've been working as a team, sharing knowledge about the other players," Sathiyan explains.

"It was all about handling the pressure at the highest level. We worked as a team and shared the pressure, be it sitting on the bench or playing in the arena. Sharath is not just alone, all the players are ranked very high and that also eased a little pressure on him and we were also backing it up by playing well in the doubles and singles. Even from the bench Sanil (Shetty) and Amal (Anthony Amalraj) were supporting quite a lot along with Max sir (Massimo Costantini)."

The women's team's historic gold medal win over Singapore also acted as an inspiration. It was a special win on a special night. Sharath brought home his fourth gold. Sathiyan soared on debut. Harmeet's childhood dream (of winning a medal at the CWG) was fulfilled which he still can't believe has happened.

In Gold Coast, the women's team exceeded expectations and the men's team lived up to them.

These five days in Gold Coast have all but proved it.