Indian hockey is a veritable book of stories. Stories of its rise, its opulence interwoven with silky skills, magical dribbles, of the shift from a giant to an also-ran, of the genius of Dhyan Chand, Balbir Singh Senior, Ashok Kumar, Mohammed Shahid. Mesmerising tales of a past you listened to in awe and watched without as much as a blink. Over the years it became an enigma; a past that didn’t match the present.

But in the last couple of months a transformation of sorts has been taking place. Much has been written about the importance of 2018 — a year in which Indian hockey can clearly stamp its authority once again in a world hoping to see the national team on the podium. That journey once again starts from the Gold Coast in Australia when India kicks off its campaign for the 2018 Commonwealth Games. Call it a journey, an adventure, or a quest, but like a bunch of explorers looking for the ‘lost land’, this men’s Indian hockey team wants to merge the past into the present. 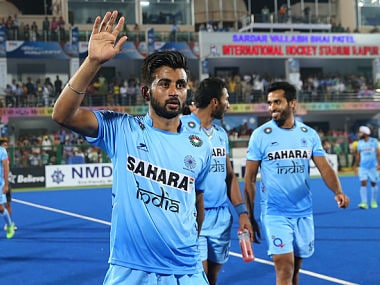 Not since the 2000 Sydney Olympics has a bunch of players raised such expectations where even the most pessimistic believe the national team would improve on its two silver medals won in 2010 and 2014 editions and bring back gold. Of course, in the path lie, as always Australia.

But the confidence, chatter, the articulation come from the coach. After the fifth-place finish at the Azlan Shah with a young team, Dutchman Sjoerd Marijne was asked: “The Aussies have won the Azlan and more important than the title have gained a momentum, do you feel that would be crucial?”

Marijne replied, with a little smile playing on his lips: “I don’t talk about other teams. But the performance and reply will come at the Commonwealth Games.”

Not many coaches in India’s recent past have had the start that Marijne has enjoyed. He started with a win at the Asia Cup, following it up with a bronze at the Hockey World League Final and then two finals in the double-leg 4-Nation tournament in New Zealand where they only lost to Belgium. The 5th position at the Azlan Shah would just be a stepping stone in their packed 2018 calendar. Playing the final at the Gold Coast would be India’s third consecutive, if they make it that far. Looking at the Pool and the composition of the team, the story of an India-Australia final, yet again, holds.

India has England, Pakistan, Malaysia and Wales in their group. One of the keen watchers of the Australia-England final at the Azlan Shah was Marijne. It’s a crucial match in India’s Pool B. In five appearances, England have two bronze medals while India have two silver in four CWG’s. But this England team is strong on the counter and plays with the pace of sprinters. It’s in the holding of the ball that India has that massive advantage where they clearly cut the pace, inject their own brand of skills and midfield domination to create chances of penalty corners (PCs) and field attempts.

Yet, it will be an interesting and a highly intriguing match-up. But it is the opener against Pakistan that will catch everybody’s eye. Not only because it is Pakistan but that our rivals have poached former coach Roelant Oltmans. Now this is a potential Bollywood pot-boiler with themes like winning, jingoism and revenge coursing through the match. Oltmans was sacked and Marijne came in and now being on the other side of the border, he would aim to put it across.

At the moment, it would be a big upset if Pakistan win; the stats don’t show that — in our last six encounters, India have won all, most of them with big margins. Incidentally, in four of those ties, Oltmans was India coach. So the relevance of knowing exactly where India play and how, and which player is strong or brittle is knowledge that, among all coaches in the world, only Oltmans has. It’s another matter that Pakistan need to have that same class and talent that India brings on the pitch. Still, it is a tie not to be missed.

Against Malaysia, there are no mid-paths. Either we win big or lose narrowly. It’s always the start and early goals that put Malaysia under pressure. Their coach Stephen Van Huizen has always maintained that to contain India is one part of the story; the bigger challenge is to stop them creating chances. “We always believe we will have a chance but we need to stop India scoring early goals,” says Van Huizen. “I believe that we do get stronger as the match progresses. We need to hold our defence against their skills.”

Numbers are again with India as we have beaten Malaysia in our last three matches with the most recent 5-1 win coming in the 2018 Azlan Shah. Malaysia’s strongest point is their counters but Rupinder Pal Singh, Harmanpreet Singh, Amit Rohidas and Sreejesh in goal would have the skill set to hold them back.

Wales should be the easiest game for India, though the cliché is ‘no game is easy.’ Yet in modern hockey, consistently playing matches through the years and in various tournaments gives you that edge that becomes crucial against a team like Wales. India have played six matches against them, an indicator of Wales not being top flight competition, and won five while drawing one.

For all the talk about a robust defence and a free-wheeling midfield, it’s the muscle in the forward line that most teams would be wary off. It is without any doubt India’s trump card and a lovely mix of deceptive skill strengthened by the muscular play of Gurjant, Mandeep and Dilpreet Singh. If there was a playmaker beyond the midfield, it is Akashdeep with his deceptive runs, artistry, finesse, taps and the ingenuity of the twist and pass in the opposition striking circle. Sunil has the speed to break through but at times needs support. Lalit would always be the change required when the opposition defence is slightly beleaguered and he is the one with the killer run combined with a sleight of hand and craftiness that keeps the defence guessing.

In the midfield, you have the legs in Chinglensana, Sumit and Vivek Sagar Prasad with Vivek being given the role to overlap. He did that quite well in the 4-Nation in New Zealand and got three goals. Except that he has never been tested in a tournament environment with the senior side.

In terms of skill, shielding ability, thinking on his feet, finding space and shooting, he has it all. Sumit’s selection in the team is purely on pace and the ability to carve a path through the midfield and overlap on the flanks. Plus the youngster, part of the 2016 Junior World Cup team, has enough in reserve and at times functions like the team’s reserve generator.

Indian captain Manpreet Singh loves moving up, but against teams like Pakistan, England and Malaysia, he would, more than once in a while, wear that defensive gown too. At the moment, he is the skipper and the man expected to lead the charge to the podium at the Gold Coast and also at the 2018 World Cup.

It’s in the defence that India need to be careful. Players like Rupinder Pal and Harmanpreet have the experience with Harmanpreet being one of the safest when carrying a ball through the defence, but youngsters like Varun Kumar, Rohidas, Gurinder need to show that ability that they can raise their levels under intense pressure.

Playing safe is one thing but in today’s hockey, usually when under pressure, defenders can create that aerial flick or a hard hit that reverses an opposition attack into a counter for India. Of the lot, only Harmanpreet has that presence of mind. But when it comes to PC’s, India has Harmanpreet, Rupinder Pal, Varun Kumar and Amit Rohidas. Not many teams can boast of a four-man team for a PC. Still, Marijne would use Rupinder and Harmanpreet, with one of them being on the field at any point of time. Tactical changes in the rotation of the PC’s will come in the form of Varun and Rohidas. With P Sreejesh and Suraj Karkera in goal, India is as safe as a military barrack.

It’s a big year. Big events. Big tournaments. And the curtains go up at the Gold Coast. There is no underlining the importance of a Commonwealth Games gold when it comes to giving that momentum to a team embarking on playing the Champions Trophy (top six in the world), Asian Games (winner qualifies for 2020 Olympics), Asian Champions Trophy (top six Asia), and then the holy grail, World Cup 2018. You can’t win them all. That would be a fairytale. And Marijne, even though he might say ‘we always play for a win’, understands the importance of picking and choosing your tournament.

Sometimes, big tournament atmosphere swallows you. Manpreet was asked about the match against Pakistan. His reply, in a way, was a throwback to the last decade and the changes that have come now. “We have our first match with Pakistan but I think it is more important to maintain our game and structure and not get emotional, because if we get emotional then there will be more chances to do mistakes. So we need to maintain our gameplan and structure and the chances we get, we change it into gold.”

Sjoerd Marijne has promised changes and podium finishes. Yes, it’s a step at a time. But it’s the team’s adaptability and versatility that should deliver the medals.