New Delhi: Least affected by the recent controversies around her, India's pistol ace Heena Sidhu's primary target is the World Championship, as she looks to use the upcoming Commonwealth Games as a "stepping stone" to achieve success in bigger events.

"These Games are important -- CWG and Asian Games give you a heads up to Olympics. It's a very important year and the biggest challenge for me is the World Championship," Heena told PTI.

A former world number one in air pistol, Heena added, "Training is going very well and we have accomplished a lot. It is a stepping stone for the rest of the tournaments, especially the World Championship."

The 52nd World Championships will be held from 31 August to 15 September in Changwon, Korea. There are 48 individual Olympic quotas and 12 mixed team Olympic quotas set to be assigned there. 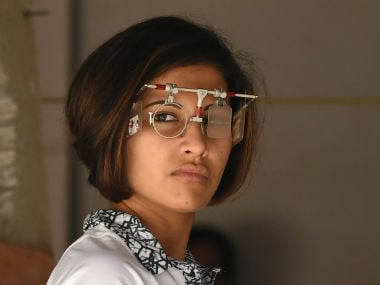 A disappointed Heena recently let out her frustration on social media amid reports that the Sports Ministry had called for dropping of 21 names, including that of her husband and coach Ronak Pandit, from the Indian Olympic Association's list of non-athletes as part of the contingent for the Gold Coast Games.

Asked if it distracted her from her goal, the World Cup Finals gold-medallist responded in the negative.

"I don't feel tension and let these issues distract my training. I am not worried about what has happened and only concentrate on training. Shooting and nothing else."

Ronak's name, though, has been cleared finally, it was learnt.

"Ronak is also my coach and has been training me for the past six years," the Asian and Commonwealth Games medallist said.

"Shooting is a measurable sport, Ronak is a proven shooter and has competed in many tournaments for India, and won. Even if one spends five minutes at the range one would understand who is the coach."

Riding on a highly successful 2017, the 28-year-old Heena enters the Commonwealth Games as one if the favourites, though she is likely to face stiff competition from compatriot 16-year-old Manu Bhaker, who is proving to be a wunderkind, having won double gold in her maiden ISSF senior World Cup and the ongoing junior World Cup in Sydney.

"They have shown tremendous potential in recent times and that augurs very well for Indian shooting," Heena said of the young crop of Indian shooters, who have taken the world by storm, regularly winning medals in top tournaments.

Heena has made two trips to the Commonwealth Games in 2010 -- winning a gold in the team 10m air pistol event and silver in the individual 10m air pistol -- and 2014 where she qualified for the 10m final but failed to leave a mark.

Right after the ministry's diktat, the Arjuna awardee had tweeted, "I have never lied, never cheated. I have always stayed true to my sport. I have been shooting for 11 years now and training with Ronak for the past 6 years. And for 6 yrs I have been having this fight. Be it funding for my coach, travel or even acknowledgement. I am mighty tired.

"I just want 2 put it out for everyone that Ronak is my TECHNICAL COACH. Anybody who has spent even 5 mins on the range will know i have only one coach and thats Ronak. He is also team manager for shooting.