Sania Nehwal is undoubtedly one of the most celebrated athletes in India. She has been delivering the goods right from the start of her career and at 27, she still has a lot to offer. At the 2018 Commonwealth Games in Gold Coast, Nehwal would be looking to replicate the success of her 2010 campaign where she became the first Indian women’s singles shuttler to win gold for the cricket-crazy country. 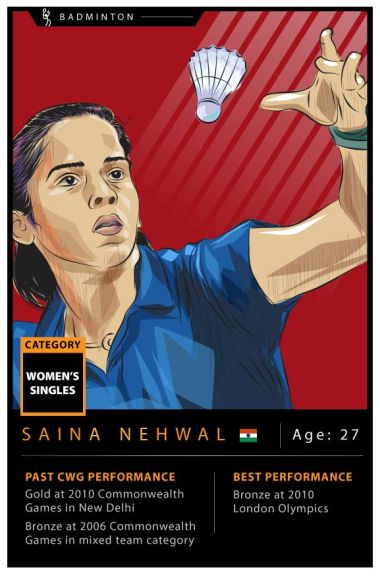 It is safe to say that badminton runs in Saina’s blood. Her parents were both fairly accomplished badminton players who represented Haryana at the national level during their heydays. Although Saina was born in a town in Haryana, she was raised in Hyderabad after moving with her parents at the age of eight.

Saina trained at the Lal Bahadur Shastri Stadium where coaches SM Arif and Nina Prasad would look after the young shuttler. Her talent had already caught the eye of many on the domestic circuit, including her future coach Pullela Gopichand.

However, financing her badminton activities was a major problem which forced Nehwal's parents to sacrifice a lot. Her expenses would range from Rs 25,000 to 40,000, including travelling for local tournaments.

Saina would shrug off all that pressure with ease as her desire to win made the difference at the end. It was in 2006, where Nehwal made a name for herself on the international platform.

The Hyderabadi shuttler created history by clinching the U-19 national title and the prestigious Asian Satellite Badminton tournament (India Chapter) twice, becoming the first player to do so.

Later that year, the 16-year-old Nehwal became the first Indian woman and the youngest player from Asia to win a four-star tournament — the Philippines Open. The same year Nehwal was also the runner-up at the 2006 BWF World Junior Championships, where she lost a hard-fought match against top-seed Chinese Wang Yihan.

In the same year, Nehwal became the first Indian woman to reach the quarter-finals at the Olympic Games when she upset World No five and fourth seed Wang Chen of Hong Kong. She continued her title-winning streak by claiming the gold medal at the 2008 Commonwealth Youth Games after claiming silver in the previous edition.

As years passed by, Nehwal began to strengthen her position in the top bracket with impressive outings at the BWF Superseries and Grand Prix events. The talented shuttler’s balanced but quick gameplay earned her a gold medal at the 2010 Commonwealth Games in New Delhi.

In 2012, Nehwal had already proved her worth at the BWF events and it was time to show her mettle in the major tournaments. She didn’t disappoint as she came home with the first bronze medal for India in badminton.

After Prakash Padukone, Syed Modi and Pullela Gopichand, it was Nehwal who brought badminton to the limelight once again in the country. She has carved her niche as the most successful Indian woman shuttler India has seen till date. Since winning a medal in London, the Haryana-born shuttler won a handful of tournaments with ease, including a silver medal at the 2015 World Badminton Championships. However, a persistent knee injury would derail her ambitions to better her performance at the 2016 Olympics in Rio.

Despite the early blow in Rio, Nehwal underwent a surgery and graced the court again at the end of the year. She won the 2017 Malaysia Masters before claiming a World Badminton Championship bronze medal in Glasgow. Not only that, she sharpened her strokes and on-court movements to become the national champion last year.

As badminton has hardly disappointed in recent editions, expectations will be high from Nehwal who enters the tournament as one of the favourites to take the gold.