One of the senior-most members of the Indian contingent that will be travelling to Gold Coast for the 21st edition of the Commonwealth Games, Sanjeev Rajput will set his sights at adding a gold to his CWG cabinet, having won a silver and a bronze in the previous editions. 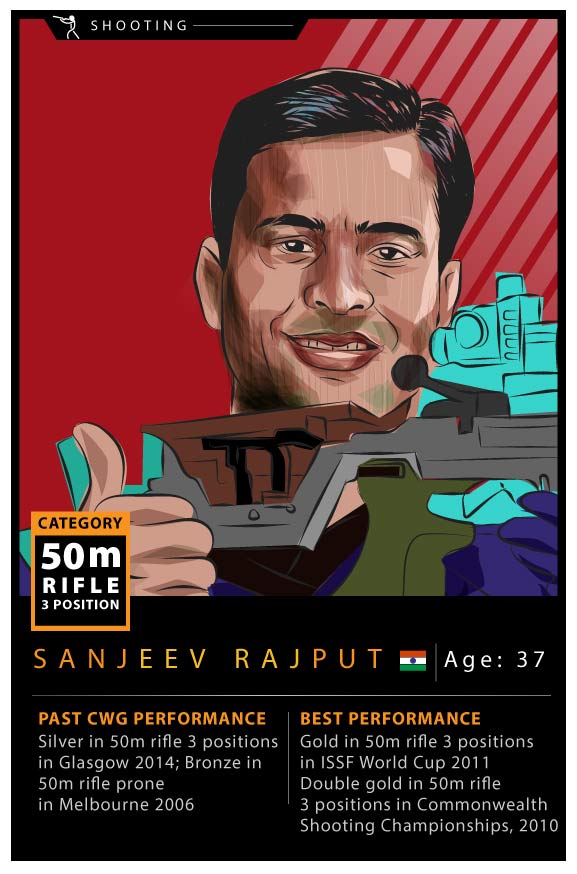 Born on 5 January, 1981 in the town of Jagadhri in Haryana, Rajput comes from a humble family, with his father, a street-food vendor, the only means of financial support for the family. After attending the SD Public School in his hometown, Rajput enlisted with the Indian Navy, in which he continues to serve as the Master Chief Petty Officer II.

"I took to the game three years after joining the navy," Rajput was quoted as saying according to a 2006 report on The Tribune, in which he was additionally quoted as describing shooting as a "rich men's sport".

After starting his career in 2001, it took him three years to record his first major achievement in the sport, as he went on to collect three golds and a silver medal in the 2004 SAF Games in Islamabad.

The following year saw him win another gold, this time at the Commonwealth Shooting Championships in Melbourne in the 50m rifle 3 position pairs event. It was the year 2006, however, which propelled him into the spotlight.

In his second trip to Melbourne in as many years, this time for his maiden appearance in the Commonwealth Games, he won the bronze in the men's 50m rifle prone singles event with a score of 594.

His confidence boosted after the CWG medal on debut, he went on to win another bronze that year, this time at the Asian Games in Doha.

The years between 2010 and 2011 were also quite rewarding for Rajput. Not only was he conferred the Arjuna Award in August 2010, but he was also adjudged the Services Best Sports Person for the year 2009-10. He won a double gold in the 50m rifle 3 positions event in the Commonwealth Shooting Championships in Delhi that year, before collecting a gold in the ISSF World Cup in Changwon, South Korea — his best performance in the tournament.

Rajput hasn't quite been active in the shooting range of late, mainly due to the allegations of rape that were levelled against him by a former national shooter in December 2016, months after winning a silver in the ISSF World Cup in Baku.

Although he managed to get bail in the case that was registered against him, Rajput stated that the episode was "one of struggle, a very difficult time", before adding that he had "full faith in the judiciary."

However, excelling in the Gold Coast Games will certainly be a massive confidence booster as far as targetting the 2020 Tokyo Olympics is concerned.