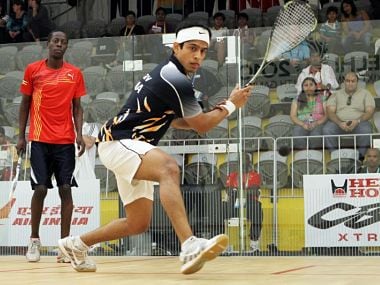 Ghosal had lost the bronze medal play-off in Glasgow four years ago and looked set to better the feat here, having reached a career-high rank of 13 at the start of the month.

The 66-minute match had initially looked going Ghosal's way but Binnie fought hard. Varying his returns with clever deception he had the Indian in a tangle.

The match went to the crucial decider when points went close until at 10-9 match point, Saurav thought he had gained a 'stroke' but the referee overruled it to as 'let'.

The Jamaican escaped and found the room to push back the Indian and grab the extra two points for a sensational win. It was the first time the two players met.

Saurav had looked good to go through but the reverse was unexpected, said coach Cyrus Poncha.

Harinder Pal Sandhu, who had gone past the first round in the morning, could not survive against the unseeded Malaysian Ivan Yuen.

In recent times when the two met, Ivan always had an upperhand over the Indian and he proved his ability once again. Except for the first game where the going was close, the Malaysian had little trouble in finding his way to victory.

The other Indians in the fray, Vikram Malhotra (seeded 16), as also Joshna Chinappa (8) and Dipika Pallikal Karthik (9) in the women's singles, sailed through to the round of 16.