Gold Coast: A defiant Cate Campbell has promised a return to her best form at the Commonwealth Games as the Aussie swimmer looks to exorcise the demons of her Olympic flop two years ago.

The 25-year-old is blazing the comeback trail after taking a year out from the sport, prompted by what Campbell described as the "greatest choke in Olympic history" in Rio — her sixth-place finish in the 100 metres freestyle final. 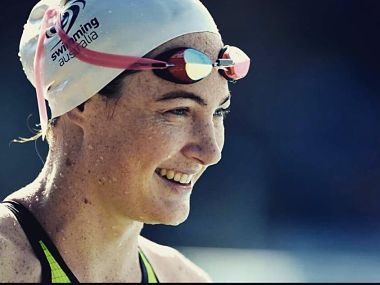 Campbell, who is limbering up for the Commonwealth Games in Gold Coast this week, rediscovered her mojo at the national trials, where she dominated the 100m freestyle and broke Australian records in the 50m free and 50m butterfly.

"I definitely missed being part of the team," she told reporters. "To be back in the green and gold, it really makes my heart beat a little bit faster."

Campbell was the red-hot favourite to win the Olympic 100m title in 2016 and led at the turn before fading badly, allowing Canada's Penny Oleksiak and American Simone Manuel to come through and tie for gold.

But Campbell, who helped the Australian women win the 4x100m freestyle title in Rio, brushed off questions about her mental strength before the Commonwealth Games swimming competition, which begins Thursday.

"It's not so much the pressure of expectation, because people want you to swim well," she said.

"They're not rooting for you to swim badly. They want to see you swim well so they will support you and not put pressure on you."
"I've never had a home crowd advantage," added Campbell, whose 100m time at trials was three-tenths of a second quicker than the effort Oleksiak and Manuel clocked to win gold in Rio.
"We saw in Glasgow in 2014 that the Scots just lifted. There was something in the air that got them ready to swim fast and I'm really hoping we feel that same energy here."

Campbell, who is looking to retain the 100m title she won in Glasgow, will get her shot at redemption when she lines up against teenager Oleksiak in Gold Coast, where Campbell's sister Bronte will be a medal threat.

Australia, meanwhile, has finished top of the medals table in swimming since the 1978 Commonwealth Games in Edmonton, and Cate Campbell backed the host nation to continue that dominance.