Memories of a path-breaking 2010 CWG gold are still fresh in her mind as Saina Nehwal embarks on a quest to regain the title at the Gold Coast Commonwealth Games next month.

Eight summers ago, a 20-year-old Saina stood on the podium with the gold medal around her neck on the final day to not only become the first Indian woman to achieve the feat but also take the country to the second position ahead of England with a gold count of 38 in the overall medal's tally. 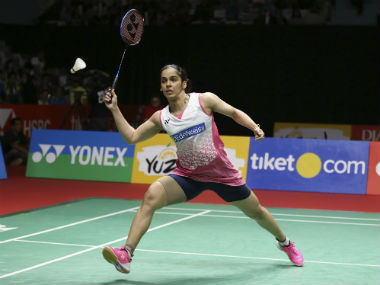 "India was second in overall medal tally in 2010. On the last day we were on 99 medals and Indian hockey (men) and badminton women's singles were left for last day. I won gold and in hockey we were runners-up," recalled Saina.

"I felt so happy to be on the podium with the national tri-colour that I cannot forget it."

It has been an interesting journey for Saina since she was handed her debut at the 2006 Commonwealth Games in the team event as a 15-year-old by former India coach Vimal Kumar, who also later trained her for three years (2014-2017).

The Haryana-born shuttler shocked all and sundry and eventually beat New Zealand's Rebecca Bellingham 21-13 24-22 to help India win a bronze in the mixed team event.

"2006 CWG Melbourne was my debut and we won bronze in team event where my role was also a major one as I won women's singles event for the team. My journey in CWG has been fantastic," Saina said.

"Of course, in 2014, I had a lot of injury issues, so I did not participate," she added, referring to the Glasgow edition where she pulled out after failing to recover from blisters and a groin injury sustained during the Australian Open Super Series.

With Saina skipping the Glasgow Games, PV Sindhu won a bronze even as Parupalli Kashyap broke a 32-year wait for a men's gold medal. RMV Gurusaidutt won a bronze and the women's doubles pair of Ashwini Ponnappa and Jwala Gutta clinched the silver. The Indian badminton team won four medals in all.

This time, India are seeded top in the mixed team event and Saina has no doubt they would do well.

"Certainly we will be winners in most of the events, looking at our strength in all disciplines of team events as well as individual events in badminton," she said.

Saina, who won a bronze at the 2012 London Olympics, had to endure a tough phase in 2014 when she even thought of quitting badminton due to a series of defeats.

However, after the Uber Cup, she decided to shift base to Bangalore and train under Vimal Kumar. It worked as she won the 2014 China Open and 2015 India Open, reached the finals of All England and the World Championships in 2015 and also became the World No 1.

However, injuries came back to haunt her again as she developed an Achilles tendonitis, which took a long time to heal. She returned to win the Australian Open.

But just days ahead of the Rio Olympics, she suffered an intra-articular injury to her right knee and had to go under the knife after her early ouster from the Games.

However, Saina is in good shape now and along with Sindhu, an Olympic silver medallist, will start favourite to win the gold. They will face stiff challenge from defending champion Michelle Li of Canada and Scotland's Kristy Gilmour, who had won the silver at the Glasgow Games.

"These girls are doing well and even Malaysian girls are also doing well. I wish them all the best for success. Earlier Tracey (Hallam) from UK was a big force and girls from Singapore were also very good players."

However, Saina, who had suffered a career-threatening knee injury which affected her Rio Olympic performance, is not thinking much ahead and wants to just focus on fitness and taking care of herself in the run-up to the Games.

"If you are fit, achievements will come your way. I got a lot of love from badminton, so I still feel I am a newcomer to the game. I take full care of my training, fitness, food and comfort," she says.

"I got excellent coaches in my life like (Mohammed) Arif sir, Goverdhan (Reddy) sir, Vimal (Kumar) sir, Gopi (Pullela Gopichand) sir plus foreign coaches, good support staff which always helped me to be fit. God is always with me so I feel motivated to do well."

Since returning from the knee injury, Saina won the Malaysia Masters, a World Championship bronze and also beat Sindhu in the National championship finals last year.

Injuries continued to trouble her as she developed some ankle issue but she came back again to reach the finals of Indonesia Masters this year and she will once again carry a billion hopes when she steps into the Carrara Sports and Leisure Centre.

Saina said she won't take it as pressure and she is hopeful that the Indians will come home with the best haul from Gold Coast.

"There is no pressure, it is a competition and we have to perform to achieve success," Saina said.

"We have improved infrastructure, we have excellent coaches and lots of talent in each game, we have equipment at par with any of the developed country of the world.

"So I wish the Indian contingent comes with best ever position in this chapter too," she said.