The shadow of legendary sprinter Usain Bolt will loom over the athletics competition at the Commonwealth Games in Gold Coast. As indeed it will for some time at least. Yet, there are a few track and field stars who can ensure that the retired Jamaican does not walk away with the limelight with his larger than life presence in the stands.

Even if some of the biggest names in the business are away since the Commonwealth Games is being held in April rather than in the second half of the year, Bolt’s compatriots Yohan Blake, a former world champion himself, and Elaine Thompson, double sprint gold medalist in the 2016 Olympic Games, will not be the only ones to take up that challenge in the Carrara Stadium.

Jamaica garnered 19 medals from track and field sport, including 10 gold, in Glasgow 2014 but disappointed its fans in the IAAF World Athletics Championships last year with just one gold and three bronze medals. The side is known to be keen to make amends.

The absence of Canada’s Andre de Grasse and South Africa’s Wayne van Niekerk — ruled out because of injury — from the men’s sprints will take some of the edge away but Blake, England’s Zharnel Hughes and South African Akani Simbine could conjure a fantastic 100m finals. Adam Gemili, who won two silver medals for England in 2014, will want to make his presence felt, too. 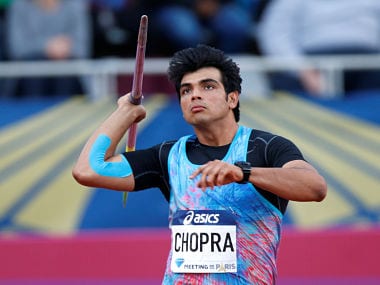 India's Neeraj Chopra will carry the nation's hopes of a medal at 2018 Commonwealth Games. Reuters

If it is said that you do not look beyond Jamaicans in sprints, Kenyans as expected dominate the middle and long-distance events. World 3000m steeplechase champion Conseslus Kipruto and World 5000m champion Hellen Onsando Obiri, former world 400m hurdles champion Nicholas Bett are among the established names from Kenya.

Some younger faces can leave their imprint, too.  World U-20 steeplechase champion Amos Kirui and 1500m Africa Youth silver medallist Eva Cherono could join the likes of African 5000m champion Margaret Chelimo and African steeplechase bronze medallist Abraham Kibiwott in ensuring that Kenya tops the track and field table at the Commonwealth Games.

Of course, South African Caster Semenya may brook no competition in the women’s 800m. Australia’s world champion Sally Pearson is in search of a hat-trick of 100m hurdles gold medals in the Commonwealth Games and will be favoured to keep her nose ahead of her younger rivals.

England’s Andrew Pozzi will be favoured to annex the 110m hurdles gold after he won the 60m hurdles crown in the IAAF World Indoor Championships. Jamaicans Hansle Parchment, bronze medallist in Rio, and world youth champion Dejour Russell will lend a majestic spark to the high hurdles event where Olympic champion Omar McLeod will be conspicuous by his absence.

Olympic 800m gold medallist David Rushida will be missing the Commonwealth Games since he is still recovering from a leg injury that ruled him out of the World championships in London. Other prominent Keynans who will be skipping their date with Gold Coast are Mercy Cherono, world champion Faith Chepng’etich and Olympic 1500m gold medallist James Magut.

England’s 30-year-old long jumper Greg Rutherford, gold medalist in London Olympic Games in 2012, pulled out despite an attempt to return from a hernia surgery. Sooner than later, administrators around the world will have to persuade track and field stars to be ready to compete through the year if the sport is to stay relevant to its audiences.

And, what about India? Will the squad picked after the Federation Cup in Patiala add to the 24 medals that its predecessors have picked up in the earlier editions of the Commonwealth Games? There is reason to believe that India can win some medals in Gold Coast. Javelin thrower Neeraj Chopra can be expected to lead the quest of the nation’s track and field stars to win some metal.

Teenaged high jumper Tejaswin Shankar is currently among those who have come up with notable performances in the nascent outdoor season this year. He knows he will have to be at his best when he locks horns with the likes of Englishman Robbie Grabarz, 2012 Olympic Games bronze medalist, Australian Brandon Starc, Bahamas’ Jamal Wilson and Malaysian Hup Wei Lee. Canadian Olympic Games champion Derek Drouin will be absent.

Discus thrower Seema Punia, long jumpers Nayana James and Neena Pinto, men triple jumpers Arpinder Singh and Rakesh Babu and shot putter Tejinderpal Singh Toor will all be under pressure to replicate, if not improve their performances from the Federation Cup in Patiala.  The 20km walk men and women’s squad can be expected to be in the frame at the finish.

Indian heptathlon hope Purnima Hembram can be in the mix if she gets the National record in Gold Coast. Competing in the Federation Cup in Patiala with a touch of fever, she logged 5815 points, 396 points shy of JJ Shobha’s record set in 2004.

If she can sustain her evolution, the Odia can pull the rabbit out of the hat in the grueling seven-event contest where Britain’s heptathlete Katarina Johnson-Thompson will want to add to the pentathlon gold she won in the IAAF World Indoor Championships in Birmingham last month.

As for the decathlon, Canadian Damian Warner will look to defend the crown he won in Glasgow, warding off competition from England’s Ashley Bryant and Grenadian brothers Lindon Victor and Kurt Felix.

Unlike some other disciplines like wrestling and weightlifting, boxing and shooting, athletics is a truly world class competition with powerhouses like Kenya, Jamaica, South Africa, England (and other British nations), Canada, New Zealand and host Australia being homes to several world and Olympic champions.

It will take a lot of effort from its competitors to dislodge Kenya from the pedestal as the premier track and field nation in the Commonwealth Games. Its quiver is full of wonderful talent that can hold its own and will take some beating.