Chowrasia two behind leaders after first round in Manila

Manila: SSP Chowrasia was just two shots behind the leaders, Sam Brazel and James Ryan Lam, to finish tied fifth at the end of the opening day of the USD 300,000 Solaire Open here today.

Chowrasia, who will be dividing his time between Asian and European Tours this year, carded a first round of three-under 68 and was two behind the co-leaders, who shot 66 each.

Chowrasia was tied fifth and Miguel Tabuena of the Philippines and Rikard Karlberg of Sweden were tied third at 67. 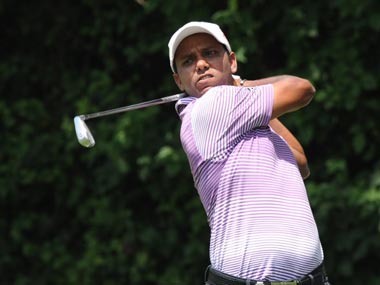 Chowrasia had as many as eight birdies, but he also dropped three bogeys on his way. He had a fine stretch between the ninth and 15th, during which he had four birdies.

Brazel of Australia reeled in a five-under-par 66 to share the opening round lead. Brazel, who is equally skillful in fishing, snared six birdies and one bogey, while James Ryan Lam posted a flawless round to spearhead the Filipino challenge at the demanding The Country Club, which is hosting its first Asian Tour event.

Tabuena and Karlberg, a two-time Asian Tour winner, trailed by one shot in tied third as they took advantage of the relatively calm morning conditions.

Brazel, 35, felt right at home in his debut appearance at The Country Club as he negotiated his way around the tricky greens in 25 putts.

Defending champion Lin Wen-tang fired a 70 for tied 18th after being punished with a double bogey when his wayward second shot on hole 18 landed in the water.