Magnus Carlsen doesn't show mercy to anyone. Even if his opponent happens to be Bill Gates, the billionaire philanthropist, Carlsen will play his game and he will play it well.

The Norwegian chess phenomenon, who recently beat India's Viswanathan Anand to become the world champion and the world's best chess player, took just one minute and eleven seconds to checkmate Bill Gates when the two met on the Skavlan chat show on Thursday. 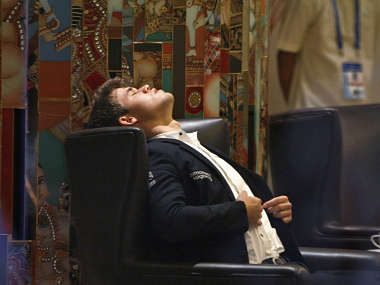 Carlsen didn't even have to think! Reuters

"The outcome is a foregone conclusion," Gates said wryly as a chessboard was brought onto the show. But even then the defeat must've left Gates stunned.

Carlsen later said that he had violated one of his own principles, and used a cheap trick to topple the Microsoft founder.

"He was a bit unlucky and eventually fell to my tactics, but he otherwise made good healthy moves," Carlsen said. "I think with a little more time, he could certainly be a pretty good player."

Carlsen also played Mark Zuckerberg and he was impressed: "I think Bill Gates is a better player, but Zuckerberg had a lot of talent for it."

Gates is a famous chess buff and this probably might have him rethinking the idea of challenging the world's best players in public. No matter what you think, 71 seconds is probably a bit too much; a bit too quick.