Chess: After Humpy, Harika too in world championship pre-quarters

Grandmaster Dronavalli Harika defeated American Irina Krush in the rapid tie-break games to seal a place in the last 16 stage of the World Women's Chess Championship.

Harika won 1.5-0.5 against the Americans. Stretched in to the tiebreaker after drawing both the games under normal time control, Harika was a bit tentative at the start of the rapid games but soon picked her rhythm to win the first game itself with black pieces. 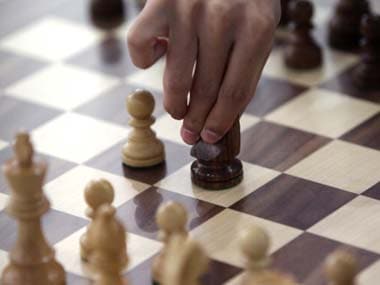 File picture of Chess Board. Getty

There were a few anxious moments in the second game too but the Indian fought out well to hold her fort and ousted Krush from this knockout championship.

Harika joined compatriot top seed Koneru Humpy in the final 16 and the two Andhra-based players can clash in the quarterfinal if they both are able to win the next match.

For the records, it will be an India-Russia duel as Humpy takes on Alisa Galiamova while Harika will meet former world champion Alexander Kosteniuk.

Harika encountered the English opening int he first game of the rapid and confidently entered a position akin tot he Benoni defense with colours reversed. Showing her likeness for these positions, Harika went for a queenside attack and knocked down a pawn on the 24th move with some fine manoeuvres.

The troubles started after getting the winning position as Harika went for a series of exchanges and the position became very difficult to convert. The Indian however hung on and was rewarded for her efforts after 70 moves.

In the second game, Harika herself employed the English opening and got a small advantage. Nerves, however, again played a major role as Krush pushed for more but the Indian was able to salvage the required half point that was enough to proceed to the next stage.

"It looked like both of us did not have any idea what to do, and no preparation plan in the pocket," said Harika about the first game.

"We both slowly started to think. And to my mind the position became easier for me to play further. I continued pressing and pressing and in the end I managed to finally win.

In the second game, I messed up all again. In the position where only white can try. I just played very safe and managed to get worse position. But in the end with some tactics I managed to save the game," she added.

While many had expected some drama in the second round tiebreaker, it shocked almost everyone when it happened. Former champion Anna Ushenina of Ukraine was ousted from the championship in the most bizarre fashion as she failed to turn up for her first game against Marie Sebag of France.