Catch all the latest updates from the FA Cup final between Chelsea and Manchester United.

They have done it! Chelsea have held on to beat Manchester United 1-0 at Wembley to lift their eight FA Cup title.

Michael Oliver blows the whistle to signal the break and it is Antonio Conte who goes into his halftime team-talk happier. Eden Hazard's 17th goal of the season sparked the match into life. Following his goal, United upped the tempo and dominated possession but barely threatened Thibaut Courtois in the Chelsea goal.

22` GOAL! Eden Hazard scores from the spot to give Chelsea the lead!

The Belgian is fouled by Phil Jones, who is booked for his challenge. The Chelsea No 10 steps up and sends David De Gea the wrong way to give Chelsea a much-deserved lead.

No Romelu Lukaku in the starting line up today as the Manchester United is only fit to start from the bench. In his absence, Marcus Rashford starts up front for Jose Mourinho' side. Like Chelsea, United have opted for a three-man midfield with Pogba, Matic and Herrera.

Antonio Conte opts for a 3-5-2 formation with a three-man midfield of Kante, Fabregas and Bakayoko with Giroud and Hazard leading the attack. Should things not go according to plan today, Chelsea can look to their bench for inspiration with the likes of Willian and Morata ready on call.

And it is Garry Cahill who hoists the FA Cup aloft!! 'Blue is the colour, football is the game' - Chelsea's club anthem is ringing around Wembley. Conte applauds! He is smiling and basking in the victory. The smell of cordite wafts around the ground. The ticker tape rains down. Hazard goes to take a selfie with Fabregas in front of the Chelsea fans. Conte is drenched in champagne. Let the celebrations begin in West London. From us, it's goodbye. 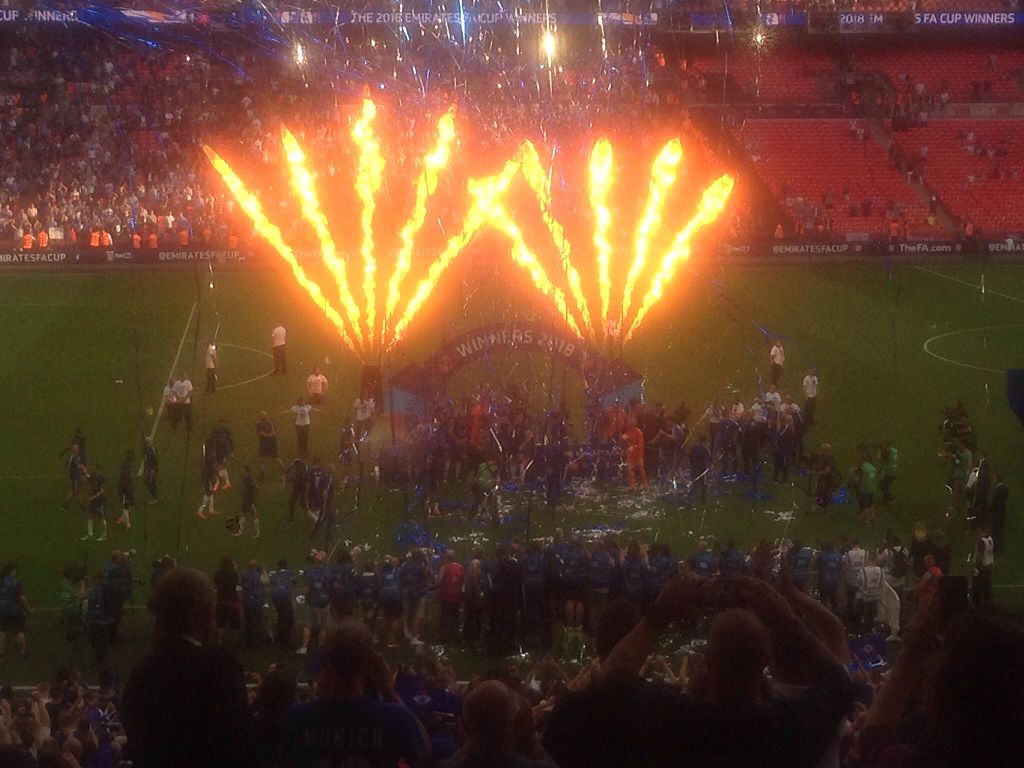 1 - Chelsea are the first team to win the FA Cup after finishing runners-up in the previous season since Arsenal in 2002. Bouncebackability. #FACupFinal pic.twitter.com/l9VLpZjZXr

And it's the moment Chelsea fans all over the world were waiting for. Gary Cahil lifts his first title as Chelsea captain as cheers for round the stadium. Olivier Giroud wins his second FA Cup title in as many years after winning with Arsenal against Chelsea last season. For Antonio Conte, it's his first-ever cup and it may have come in his final game in charge of Chelsea. However, all that is in the future as the Italian celebrates with his players.

Not a classic FA Cup final, but Chelsea deserved victory, even if their performance wasn't consistent. They dominated the first half but were forced to defend after the break. They did so with great application. Rudiger, Kante and Hazard were excellent for Conte, who has proven he is a real fighter. The truth is that Pogba should have scored with that header, but didn't. It summed up United's performance and how absent Pogba was. Courtois also made a number of key saves. Chelsea will shortly receive the FA Cup from Ray Wilkins' widow. Bobby Charlton and Ed Woodward are discussing what went wrong for Manchester United. The players have collected their runners-up medal and have trudged off the field.

As the Chelsea players celebrate on the pitch, the Manchester United players led by Jose Mourinho trudge up to the executive box to collect their runners-up medal. United enjoyed a very good FA Cup campaign but faltered at the final hurdle. Having been comprehensively beaten to the Premier League title by bitter rivals Manchester City, the Red Devils end their season with an FA Cup final loss to Jose Mourinho's former team.

1 - Jose Mourinho has lost his first ever domestic cup final in England, winning each of his previous five (excl comm shield). Blunted. pic.twitter.com/40jWryOVHA

That's the FA Cup for Chelsea!! The blue end of Wembley is celebrating, waving flags, twirling scarves and singing. United fans are clearing their end rapidly. United offered too little or, at least, couldn't breach Chelsea's back line. Antonio Rudiger played a standout game at the back. Conte leaps around. He is overjoyed and there is nice hug with Mourinho. The Portuguese doesn't look very happy, but his approach was too negative and his team not strong enough in the second half to force the breakthrough.

8 - Chelsea have won their 8th FA Cup and their first since 2012, level with Tottenham - only Man Utd (12) and Arsenal (13) have won more. Carefree. #FACupFinal pic.twitter.com/zdMQgpIAcg

They have done it! Chelsea have held on to beat Manchester United 1-0 at Wembley to lift their eight FA Cup title.

Hazard is subbed off for Willian. He gets a standing ovation from the Chelsea faithful. The Belgian's contribution to his team was immense today. He weighed on the United defence and scored the only goal of the game. It's Fergie time now, but Chelsea have possession. They are on course to win the FA Cup.
Load More

The eyes of the world may be on a Royal wedding at Windsor, but 18 miles to the east English football's own showpiece event sees Chelsea and Manchester United face off in the FA Cup final at Wembley on Saturday.

Both sides are in need of silverware to salvage underwhelming seasons.

Chelsea's need is the greater, though, as having missed out on Champions League football for next season by finishing fifth in the Premier League, many expect Antonio Conte to take charge of the Blues for the last time, regardless of the outcome.

Conte led Chelsea to the Premier League and the FA Cup final in his debut season in England last year.

And he launched a fierce defence of his record at Stamford Bridge on the eve of what could he his last clash with old foe Jose Mourinho in England.

"I like to win. I like to win trophies. I like to be a winner. For sure, I like this. But, at the same time, I think that when you work very hard, when you try to give every day 120 percent, you must be satisfied," said Conte on Friday.

"Miracles don't always happen. Sometimes it happens, sometimes it didn't. We did an important job. Then it's not my task to take the decision.”

Conte and United boss Mourinho have consistently clashed since the former took charge of the club Mourinho led to three Premier League titles in two spells.

However, both men have tried to play down their feud in recent days with Conte insisting the pair will shake hands before the game.

Mourinho has at least ensured Champions League qualification for next season via a second-place finish in the Premier League.

Mourinho, though, argued that City running up the score on helpless Premier League rivals is not as "entertaining" as he expects a tight clash with his old club at Wembley to be.

"Do you think 6-0 is entertaining? I don't think so," Mourinho said on Friday.

"I think entertaining is emotion until the end, the game open, everyone on the edge of their seats, both dug-outs nervous and tense with the result in doubt.

Another former Chelsea man is United's big injury concern as Romelu Lukaku faces a race against time to start up front due to an ankle injury.

The Belgian is Mourinho's top scorer this season with 27 goals in all competitions, including five in as many games in the FA Cup.

"Lukaku we have to wait until the last moment," added Mourinho.

Should Lukaku miss out, United will be counting on Alexis Sanchez to continue his excellent record of eight goals in as many games at Wembley for club and country.

Chelsea have no such injury concerns, and Conte hinted that first-choice goalkeeper Thibaut Courtois could start despite Willy Caballero having played in all six FA Cup ties on route to the final.

The Belgian striker now has four goals in as many games since returning to the club for a club record £97 million ($134 million) last month.