Buenos Aires: Argentina's Football Association hired a company that charters flights to transport superstar Lionel Messi and the rest of the national team for a World Cup qualifying game without knowing the name of the airline or the model of the plane, an official said Friday.

The plane was the same British Aerospace 146 Avro RJ85 jet operated by Bolivia-based charter company LaMia that later crashed in Colombia, killing 71 people, including most of a Brazilian soccer team. 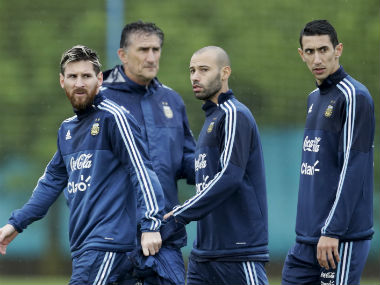 Argentine Football Association (AFA) spokesperson Miguel Hirsch said Friday the AFA was forced to look for options for a round trip Buenos Aires-Belo Horizonte flight after the plane they often use from the Andes airline was sent for technical revisions.

The Associated Press had access to offer sheets that six companies presented. None mentioned the name of the airline. But the one that the AFA's national team department chose for $99,000 was the cheapest one and the only one that did not provide the model of the plane. The second-least expensive offer was about $3,000 more.

"I suppose that since the AFA is going through financial troubles, it was a question of costs," Hirsch said in an interview with AP.

"I suppose that these people went about it in the same way that you go about contacting a travel agency or looking in the internet and buying a ticket for Buenos Aires to New York," he said. "You don't check if Delta, American or Continental flight is a Boeing 777, you say - it's a company, I know it, and it's the best price."

Bolivia's Civil Aviation Authority on Thursday indefinitely suspended all flights operated by LaMia airlines amid reports its charter aircraft ran out of fuel moments before slamming into the Andes mountains on Monday.

Many of the victims were players and coaches from Chapecoense, a small-town Brazilian soccer team that was headed to the finals of one of South America's most prestigious tournaments after a fairy-tale season that had captivated their soccer-crazed nation.

Argentina used the same aircraft before and after their 3-0 defeat to Brazil on 10 November in Belo Horizonte for the qualifiers to Russia 2018.

"Nothing happened, fortunately. But, obviously, within the AFA body, there has been a strong awareness of the risk that was taken," Hirsch said. "This was a human error. It has been proven that the pilot was carrying less gas than he should. Possibly, that's one of the reasons why the LaMia company charged less for its charters."

Led by Julio Grondona since the 1970s, the federation has been in an economic and governance crisis since the late FIFA senior vice president died in 2014.

Hirsch said that in recent months and under its new leadership, the AFA has been in talks with Aerolineas Argentinas to strike a deal so that the country's flagship carrier can fly the national team.