Wolfsburg, Germany: Andre Schuerrle fired Wolfsburg into the Champions League quarter-finals for the first time to seal Tuesday's 1-0 victory and a 4-2 aggregate win over Gent.

Having lost the first-leg 3-2 at home, Gent arrived in Germany needing to score at least twice but Schuerrle ended their hopes with a goal 16 minutes from time.

It was his Germany team-mate Julian Draxler, who scored twice in the first-leg, who danced around Gent defender Nana Asare to provide the cross which Schuerrle drilled home. 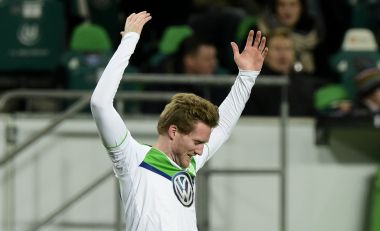 It capped a fine seven days for the Germany winger after Schuerrle hit his first Bundesliga hat-trick the previous Tuesday in a 4-0 romp over Hanover.

"It was a tough match. We wanted to defend well and wait for our chances. In the end, the win was deserved," said Schuerrle.

Hitting the winner against Gent will further raise his stock at Wolfsburg, who are now seventh -- four points from a Champions League place next season -- in Germany's top flight.

"We did it," Klaus Allofs told Sky, but Wolfsburg's relieved sports director admitted the Germans will need to improve if they are to reach the semi-finals.

"Let's wait and see who else qualifies," he added.

"There are probably some cases where it would be very difficult, but there are also some teams against whom we have a chance, as long as we keep improving."

Gent coach Hein Vanhaezebrouck said he wanted his team to unsettle the hosts, but his side was restricted to just six shots on goal.

Wolfsburg effectively closed the game down in the first-half by restricting Gent to only a series of half chances.

Schuerrle deserved his goal and had a great chance approaching the hour mark but his shot was blocked by Gent midfielder Renato Neto.

Gent centre-back Rami Gershon then blocked a Schuerrle shot, which had been heading for the back of the net, on 70 minutes.

Soon after, Vanhaezebrouck brought on Mali forward Kalifa Coulibaly, who scored Gent's second goal in the first leg, to try and break the deadlock.

It was Wolfsburg who finally opened the scoring, though, when Draxler, who had scored in both of Wolfsburg's previous games, turned provider.

The attacking midfielder picked out Schuerrle's arrival in the box for his team-mate to rifle home to the delight of the home fans.

In the dying stages, Gent midfielder Brecht Dejaegere fired over, but it was too little, too late.

Both sides had qualified for the knock-out stages for the first time, but it is German Cup holders Wolfsburg who go into the last eight pot.