London: Pep Guardiola believes it is impossible to predict who will win Manchester City's all-English Champions League quarter-final against Tottenham.

Guardiola's side, who reached the last eight following a 10-2 aggregate win over Schalke 04, will take on Spurs away on April 9 before hosting the deciding leg on April 17. 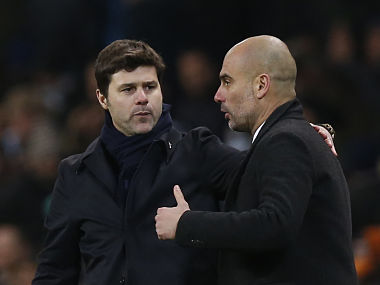 City have won their last three meetings with Tottenham and the club's director of football Txiki Begiristain claimed the Premier League leaders are "confident" they can go through.

But Guardiola was more circumspect when asked for his thoughts on the clash with Mauricio Pochettino's side, who have beaten City just once since the former Barcelona boss took charge at the Etihad Stadium in 2016.

"They are a top side, so it's 50/50. Tottenham, huge respect because I know them quite well," Guardiola said.

"It's a tough side but any other team in the Champions League would be the same.

"Any team has its strong points and weak points, the same as us. We must try to discover that."

Guardiola believes one of the keys for City in their bid to make the Champions League semi-finals for just the second time will be keeping their stars fit for a hectic April schedule as they chase an unprecedented quadruple.

"What I want is to come back from the international break with people fit, ready to play the last month and a half with everybody making his own contribution," he said.

"April is incredible with the fixtures we have, a lot of games, and everybody will be necessary to play."

City, face second-tier Swansea in the FA Cup quarter-finals on Saturday knowing a win in south Wales would move City closer to their potential clean-sweep of the four major trophies, but it is the Tottenham tie that has captured the imagination.

Juventus or Ajax lie in wait for the winners in the semi-finals and Begiristain expects City to be there.

"We are confident. We are doing well, we are having a good season and we are in a good place now in the sense of the football that we are playing," he said.

"So, we are confident, but we know Tottenham will create problems... We played last season (in the quarter-finals) against Liverpool and did not go through. I hope this time we have better luck."