Lille: Willian's brilliant late strike gave Chelsea a precious 2-1 win away to Lille on Wednesday that they will hope kickstarts their Champions League campaign, but it was the young stars in Frank Lampard's side who stole the show again. 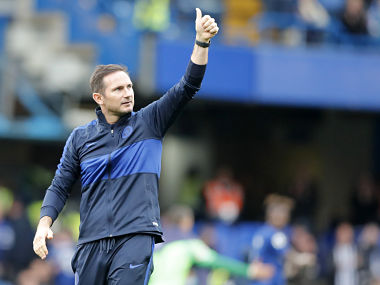 The Brazilian volleyed home in the 78th minute to decide the game under the roof at the Stade Pierre-Mauroy on what was his 300th appearance for the club.

Tammy Abraham had earlier put Chelsea in front on his 22nd birthday with his eighth goal already this season, only for Victor Osimhen to equalise for Lille.

Chelsea are now off the mark in Group H after losing at home to Valencia a fortnight ago, although it is Ajax who continue to top the section with a maximum six points.

"Overall it was a good game. It's never an easy place to play. Give it to the team, what a fantastic performance," Abraham told BT Sport.

Lampard's team face Ajax next and will do so with renewed belief after this victory.

"It is such a tough place – the roof was on, the crowd were up for it, the speed in their team and on the counter-attack especially was very evident, so we had to be ready for it and I thought our performance was really good," said Lampard.

It was a game decided by one of the most experienced players on the pitch but which was bristling with exciting young talent as these clubs adjust to seeing their standout players – Eden Hazard on one side, Nicolas Pepe on the other – depart in the close season.

Lampard fielded two 24-year-olds as well as four more players aged 22 or under in his line-up here, as teenager Reece James started as a right wing-back in a 3-4-1-2 system.

James only made his top-team debut for the club a week ago in a League Cup tie against fourth-tier Grimsby Town. His second-half replacement, Callum Hudson-Odoi, set up the winner.

"This isn't a game for niceties, we have to go and win these matches and improve all the time and there were loads of signs of team improvement tonight, and individuals," Lampard added.

"The young players are responding and they have to keep doing it because the Champions League level is something else."

Much has been made of Lampard's promotion of youth this season in response to Chelsea's transfer ban, although their team here also featured N'Golo Kante, with the France midfielder returning from his latest spell out.

Indeed, the average age of Chelsea's team at kick-off was actually a year older than that of Lille.

Chelsea took a 22nd-minute lead when Fikayo Tomori's ball into the box was not dealt with by the home defence, and Abraham – capped by England but eligible for Nigeria through his father – controlled and fire home.

Lille actually looked the better side going forward for long spells and Luiz Araujo was denied by a good Kepa Arrizabalaga save just after the half-hour.

Moments later they were level, Jonathan Bamba sending in a corner from the left for Osimhen, the gangly 20-year-old Nigerian striker signed in the summer, to head in his seventh of the campaign.

Jorginho struck the outside of the post with a first-time strike from range just before half-time, while Kepa tipped a Benjamin Andre header around the post early in the second half.

However, the introduction of Hudson-Odoi, the youngest of the lot at just 18, for James midway through the second half, and subsequent change of formation, breathed new life into the visitors.

Mason Mount was denied by Mike Maignan soon after, and just 12 minutes remained when winger Hudson-Odoi crossed from the left all the way to the back post where Willian connected with a volley that bounced down into the ground, over the goalkeeper's head and in.

There was no way back for Lille, who have now failed to win any of their last 13 matches in Europe.

"They are used to playing matches like these every weekend, in Europe every season, and we saw the difference that exists between us," said Lille coach Christophe Galtier.