Berlin: Bundesliga new boys RB Leipzig drew level on 24 points with Bayern Munich at the top of the table on Sunday with a record-equalling 3-1 win over Mainz.

Leipzig, who have now matched Bayern's run of seven wins and three draws from their opening ten games, equalled the record for a team in their first Bundesliga season, set by MSV Duisburg, who also went ten games unbeaten in the 1993/94 campaign. 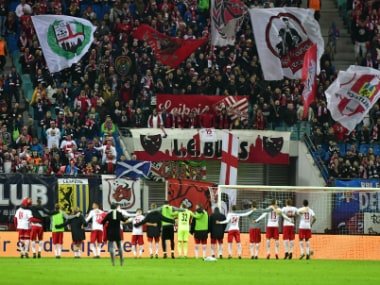 RB Leipzig's win puts them level with Bayern Munich at the top of the Bundesliga table. AFP

Timo Werner (two) and Emil Forsberg scored Leipzig's goals in a game which threatened to turn into a rout as the hosts wasted four clear chances with the scoreline flattering Mainz, who drop to tenth.

After Bayern were held to a 1-1 draw by Hoffenheim on Saturday, Leipzig seized their chance to match the Bavarian giants' points tally, but stay second on goal difference.

Leipzig, who were only founded in 2009, earned their place in Germany's top flight this season with four promotions in seven years.

Their pre-Christmas showdown with Bayern at the Allianz Arena on December 20 is building to be a key clash.

But Leipzig are keeping their feet firmly on the ground, repeatedly rejecting the tag of 'Bayern's Hunters', which the German media is eager to bestow upon them.

"This is a dream, but we won't blow things up to say we're hunting Bayern," insisted 20-year-old Werner after his two goals.

A falsely triggered fire alarm delayed kick-off by three minutes at Leipzig's Red Bull Arena, and the 43,000 spectators barely had time to find their seats when Werner gave Leipzig the lead.

Left winger Forsberg had his shot blocked, but Werner tapped home the rebound for his fourth goal of the season.

Werner returned the favour by out-sprinting Mainz's Nigerian defender Leon Balogun and steered the ball into Forsberg’s path for the Sweden international to double their lead on 21 minutes.

A minute from the break, Forsberg also sprinted past Balogun before squaring for Werner, who fired home off his left foot to make it 3-0 at the break.

Mainz coach Martin Schmidt brought on defender Stefan Bell for winger Jairo Samperio for the second half, but Forsberg and Werner both had clear chances and could have added four more goals.

Mainz pulled a goal back 16 minutes from time when Bell out jumped his marker from a corner and placed his header into the net.

Schalke continued their rise up the table with a 3-1 win at home to Werder Bremen as Algeria's Nabil Bentaleb, on loan from Tottenham Hotspur, netted his fourth goal in four Bundesliga games.

"We have won seven of the last nine games -- that's a huge increase," Schalke midfieler Max Meyer told Sky. "We had the game under control right from the start."

The Royal Blues are 12th in the table having climbed up from the bottom, after losing all of their first five league matches, while Bremen drop back into the relegation places and are 16th.

Bremen's Serge Gnabry, who has been called up to the Germany squad for Friday's 2018 World Cup qualifier against San Marino and friendly against Italy four days later, netted a first-half penalty for Bremen.