London: RB Leipzig manager Ralph Hasenhuttl has warned clubs interested in Naby Keita that there is no chance the Guinea midfielder will be sold this season.

Keita was the subject of two recent rejected bids from Liverpool and Leipzig have confirmed they turned down an offer of £67 million ($87 million) from an unnamed club. 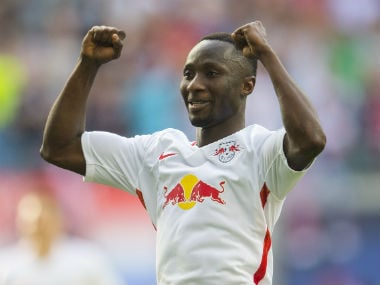 The 22-year-old has become a hot property since scoring eight goals in 31 appearances last season to help Leipzig qualify for the Champions League.

With Liverpool this week taking the unusual step of publicly ending their interest in Keita, Hasenhuttl was quick to make it clear the Bundesliga outfit are determined to hang onto their prize asset at all costs.

Asked about Liverpool's withdrawal from the race for Keita's signature, Hasenhuttl, speaking after his side's 1-0 defeat against Sevilla in the Emirates Cup, said: "That's good. The chances of Naby leaving are nil. It's 100 percent that Naby will play this year at Leipzig

"At the beginning of the transfer period, we said we would start the season with all our best players.

"Liverpool will finish their transfer activities and that's ok with me."

Hasenhuttl believes Keita will benefit from another season of development with Leipzig, with the experience of making his Champions League debut a crucial part of his development.

"It's important that all the players stay because we are playing for the first time in the Champions League," he said.

"They are all young players, they will learn a lot this year.

"We give them the chance to play at the highest level. They have all they want.

"You can see how important Naby is for our game."

Told that Liverpool have indicted they will resume their pursuit of Keita at the end of the forthcoming season, Hasenhuttl said he wasn't surprised given the rapid rise of the player and his team.

"It’s normal when you play such a famous season that other clubs are watching us and you get interest," he said.

"They (Liverpool) will not be the only one I think. Until next summer we will keep it closed and then we will have a look."

Keita was involved in an ugly training ground incident this week when his foul on team-mate Diego Demme caused a practice session to be abandoned while his team-mate was taken to hospital for treatment.

But the Guinea star was later pictured making amends with Demme and Hasenhuttl is confident he remains fully committed to the club.

"He's more focused on us and has more fun than last year. The first time in the Champions League is a great thing for Naby," he said.